You just never know who might be watching ... the Oscars? According to a report from CNN, the CIA was tweeting about Black Panther and the tech of Wakanda during the Academy Awards telecast. 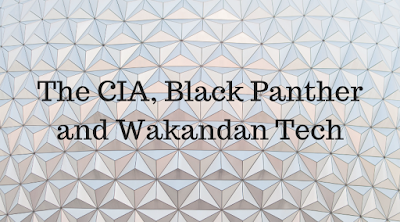 It was noted that the CIA tweets were “part of the CIA's ‘Reel vs. Real’ series, which seeks to demystify the CIA's mission by comparing what's seen on screens to reality.”

Among the topics from Black Panther touched on by the CIA were holograms: “They’re real-life hot tech right now & as they improve, intel practitioners in the future could incorporate holographic displays for operations or holographic projections to illustrate situations to the President or other policymakers.”

And on vibranium, the CIA tweeted: “The #vibraniumin Black Panther’s suit protects him from kinetic damage, & vibranium sneakers are both super-quiet & amazing shock absorbers for jumping. Those would be great for spies, right? Too bad vibranium isn’t real.”

In fact, there’s more on the CIA and Black Panther. Check out the CIA’s deeper dive on Wakandan tech, based on questions posed to, as the CIA explained, “one of the CIA’s most innovative scientists. We will call her ‘Rebecca’ Rebecca not only has a background in the traditional sciences, but also in emerging technologies and digital innovation.”

What about the invisibility tech that hides Wakanda from the world? The CIA’s Rebecca notes:

Wakanda keeps itself hidden from the rest of the world by a sort of invisibility cloak that covers the whole nation, and presumably blocks all sorts of radiation, not just light. In real life, I think spy satellites would have picked up the heat, radio waves, microwaves, or other signs of a fully-industrialized country otherwise. (Apparently the internet somehow gets through for the remote-control cars though).


The bad news is that this is physically impossible. The good news is that with vibranium and super-science it’s plausible, and it’s already being done in our real world on a much smaller scale.

You can use lenses to bend light around small objects, like a person’s hand. The lens approach could scale up to hide a vehicle, but only from the person looking through the lens, and only from human vision. You can also use nanotechnology, like Black Panther’s suit, to hide other nanotechnology or something up to the size of a cell. So in theory, Shuri could make every bit of the Panther Habit invisible, but I doubt she wants to.

To hide a nation from the rest of the world, you’d need a combination of metamaterials (material engineered to produce properties that don’t occur naturally) to affect the magnetic components of light and other radiation. Vibranium has interesting magnetic properties that Shuri uses in the kimoyo beads and EMP beads, so a cloak laced with it could give you that. This has to be a physical cloak, though, something like researchers at Boston University and Tufts University made out of silk to block the terahertz band (a wireless communication frequency found between radio waves and infrared light).

Well, there you go – a mix of Disney, Wakanda and the CIA. Who says spies aren’t fun?