Orlando’s Magical Dining program was extended until October 17, a fortuitous bonus for us on a recent weeknight.  We had tickets for a movie at the AMC at Disney Springs, and since the lines at Disney Springs were longer than usual due to the 50th Anniversary celebration crowds that were still around, we decided we would be better off making reservations to sit down to eat after the movie, instead of doing our usual mobile dining order at Chicken Guy! or D-Luxe Burger.

For the most part, we were glad we did.  To be honest, with all the great restaurants at Disney Springs, Wolfgang Puck’s wasn’t really on our radar.  We probably would have gotten around to trying it eventually, but Orlando’s Magical Dining program did exactly what it was meant to do – got us to walk into a restaurant that we ordinarily wouldn’t have patronized. 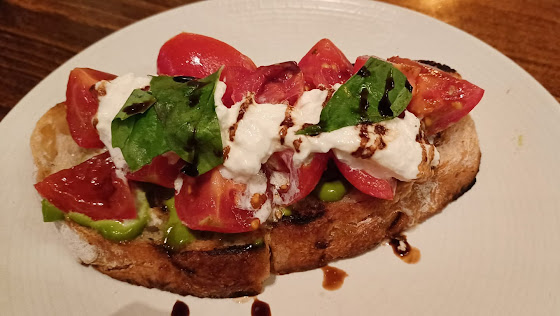 Wolfgang Puck Bar & Grill is a crisp, wide open restaurant with soaring ceilings, clean lines, and an open kitchen concept. The busy kitchen was entertaining to watch, but the modern “farmhouse chic” décor with its high ceilings, while beautiful, did make conversation difficult at times as the noise level was pretty high in the room.  On the plus side, our waiter was very good, with a cheerful sense of humor.

For those unfamiliar with Orlando’s Magical Dining program, it runs for a few weeks at the beginning of the fall each year, with a prix-fixe price for a 3-course meal, and a portion of the meal’s cost going to local charities.  It’s a chance for local restaurants to introduce themselves to new diners, welcome back previous patrons, and showcase some of their best dishes.  This year’s Magical Dining price was $37.00, with $1.00 from each meal going to Pathlight HOME and IDignity, combating homelessness in Central Florida. The limited selection menu was designed by Tony Chi, and was selected to highlight the best of Wolfgang’s signature dishes. 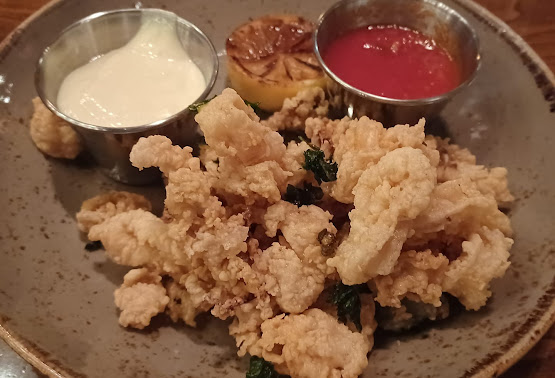 At the restaurant, the appetizer choices included Grilled Bruschetta; Caesar Salad; or Calamari Fritti.  Our table chose the calamari and bruschetta. The calamari appetizer was very good – light and crunchy, without the “too chewy” problem that can plague calamari, and was served with zucchini and olives.  The amazingly fresh-tasting Grilled Bruschetta was plated with marinated cherry tomatoes and an excellent, house made, fluffy mozzarella that was closer to a ricotta texture than typical firmer mozzarella.  The basil leaves that would be traditional in a bruschetta were replaced by a very delicate and lovely pesto sauce layered on a grilled oval of ciabatta.  A drizzle of balsamic vinegar added just a touch of tang to pull the dish together.

The Magical Dining menu offered a choice of three main courses, a Rigatoni Pasta; Oven Roasted Scottish Salmon; and Chicken Wienerschnitzel. We chose the salmon and the chicken.

The salmon dinner ranked as a big disappointment, however, and those who had waffled between the salmon and the chicken before ordering were happy they’d chosen the chicken instead. The salmon flavor was weak, and whatever distinctiveness it possessed wasn’t exactly a plus. The combination on the menu of Aguachile, Zellwood corn, avocado mousse, and cilantro sounded intriguing, but the execution failed the taste test. 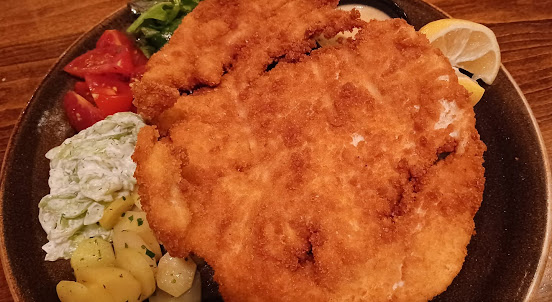 On the other hand, we would come back again for the Chicken Wienerschnitzel, wonderfully crisp on the outside, yet still moist on the inside.  The cutlet was huge, and served with a yummy mustard sauce on the side, and as is traditional for schnitzels, a wedge of lemon to squeeze over the top.  The accompanying fingerling potatoes were sliced super thin, and prepared with a vinegar dressing, and dill cucumbers were served julienned, almost in a slaw format.  A marinated tomato mix finished the plate.  We are still talking about that Chicken Wienerschnitzel several days later, and would go back just for that dish.

Three choices were also available for dessert.  Spanish cheesecake, house-made carrot cake, and an ice cream cookie sundae were offered up.  We picked two of the three at our table.  The carrot cake dessert was some of the tastiest carrot cake we’ve ever had, and was quite a pretty presentation, too. The cake was airy, and the icing – always a biggie with carrot cake – was light and creamy, with the caramel sauce adding to the flavor treat. Candied walnuts were an unexpected addition to the presentation. 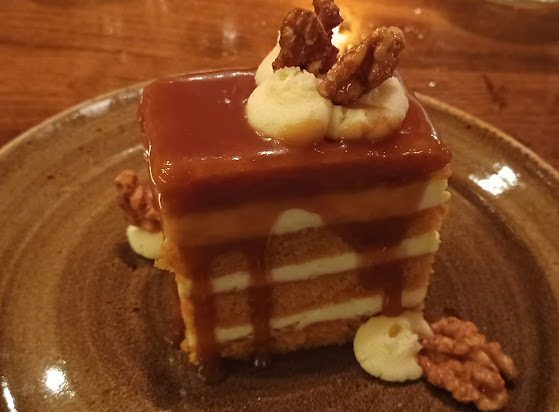 Speaking of light… the Spanish cheesecake was incredibly light as well, perhaps the fluffiest cheesecake we’d ever eaten.  It was not overly sweet, so the house made caramel topping added a nice balance to the selection.  It was an excellent choice to finish the meal.

All in all, we were glad we’d taken advantage of Magical Dining, and happy to have given Wolfgang Puck’s a try.