Superheroes saved the 2021 box office – specifically, Marvel heroes did so.

The pandemic obviously has devastated the movie theater business, and while the 2021 domestic (U.S. and Canada) box office take was double what was earned in 2020, the numbers remained well off the pre-pandemic 2019 level. 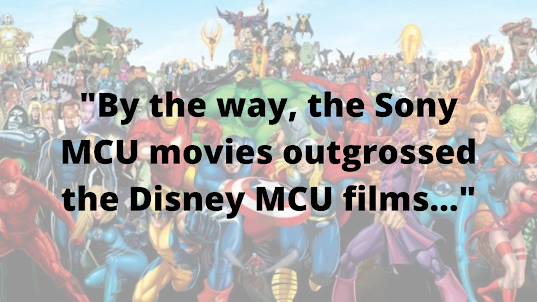 In fact, the $4.58 billion earned in domestic movie ticket sales in 2021 registered the same level as was garnered in 1992, according to the Hollywood Reporter. However, that fails to factor inflation into the equation, meaning that the 2021 earnings were even less than the 1992 take in real terms.

As for a studio breakdown, CNBC noted that Disney led the way with 26 percent of the 2021 box office, followed by Sony’s 23 percent. 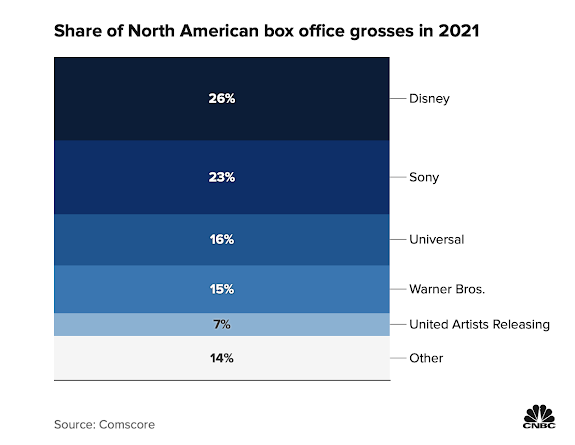 But let’s be clear, it was the Marvel Cinematic Universe that truly ruled. Five of the top six movies in terms of domestic gross were MCU movies, with three from Disney and two from Sony.

Spider-Man: No Way Home (Sony) topped all domestic earners with $573 million, followed by $225 million for Shang-Chi and the Legend of the Ten Rings (Disney), $213 million for Venom: Let There Be Carnage (Sony), $184 million for Black Widow (Disney), and $165 million for Eternals (Disney).

That tallies up to 30 percent of the 2021 domestic box office for MCU films.

As for the other top films, F9: The Fast Saga was number five at the domestic box office (Universal at $173 million) and number seven was the James Bond film No Time to Die (United Artists at $161 million).

So, we’ve learned (or relearned) a couple of things about movies during a pandemic. First, big blockbusters (in particular, superhero blockbusters) will draw some audiences into theaters – mainly, younger moviegoers.

Second, non-blockbuster, more adult-oriented movies, if you will, are having a very tough time, including The Last Duel (Disney’s 20th Century Studios) and West Side Story (Disney’s 20th Century Studios), which were both excellent. Part of this, no doubt, is less willingness among older moviegoers to sit in theaters while pandemic issues still rage on. To be less generous, such films also require more of an attention span than what might be needed for at least some superhero movies.

What does any of this mean post-pandemic? Speculation can, and has, run in all kinds of directions, but the safest take is that the pandemic has accelerated a shift among consumers to viewing more content at home. However, the degree of this shift and what it will mean for movies being released in theaters remains anyone’s guess at this point in time. The general direction of greater in-home viewing is great for consumers (who are ultimately driving the trend), and for content creators who are seeing and will continue to see increasing opportunities to create via streaming services.

But as anyone in the buggy whip industry would have told you with the arrival of the internal combustion engine, when these kinds of upheavals of innovation dramatically alter the economic landscape, matters of survival emerge for businesses who were entrenched in doing things the old ways. This all points to theater owners facing considerable challenges in creating an environment that will get people off their couches and into theaters.