We’ve been looking for the Minnie Mouse 50th Anniversary Sipper to accompany our Mickey 50th Anniversary popcorn bucket for weeks now, but between block out dates, holiday crowds, and sold out locations, we hadn’t had much success.  On Saturday night, we thought we had a lead on one at D-Luxe Burger at Disney Springs (it was on their menu…), but they, too, were sold out. 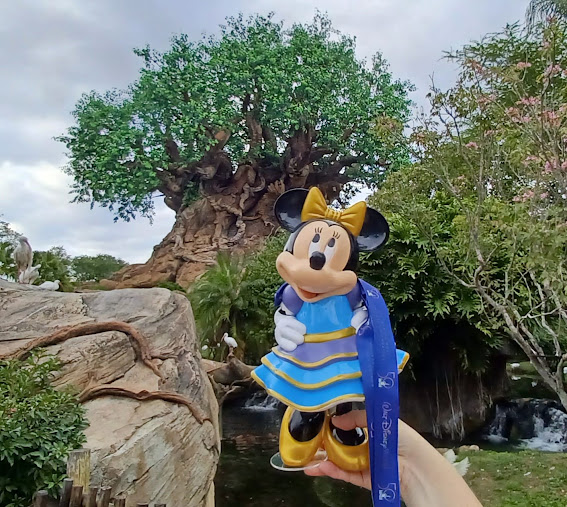 The following day, though, quite unexpectedly, we discovered Minnie popping up all over Animal Kingdom. Rows upon rows of Minnie Mouse in her bright blue 50th Anniversary outfit were lined up on kiosk counters across the park, like little soda soldiers. We bought ours at Corn-ivores in DinoLand, but they were also available at Mahindi in Africa and The Thirsty River Bar in Asia, among others.

For $17.00, you’re able to not only take home the adorable Minnie Mouse Sipper, but you get a bottle of your choice of Coke, Diet Coke or Sprite to go along with it.  (You are handed your soda bottle separately, so don’t worry about getting Minnie full of soda and trying to rinse it out in a theme park bathroom sink before getting on a plane… Minnie stays pristine unless you want to pour the soda in yourself.) She does come with a twist off cap on the back of her head that is attached to a long straw for your dining enjoyment, as well as a handy shoulder strap for toting around the park.

If Minnie Mouse sippers aren’t quite your thing, but you are looking for something a little more rugged and adventurous, there were also Animal Kingdom canteens for sale at kiosks throughout the park.  (We found ours at the Kali Ice Cream kiosk, not far from the Anandapur Ice Cream Truck in the Asia section of the park.) For $14.75, you can get a bottle of soda, with a side of Animal Kingdom Canteen. 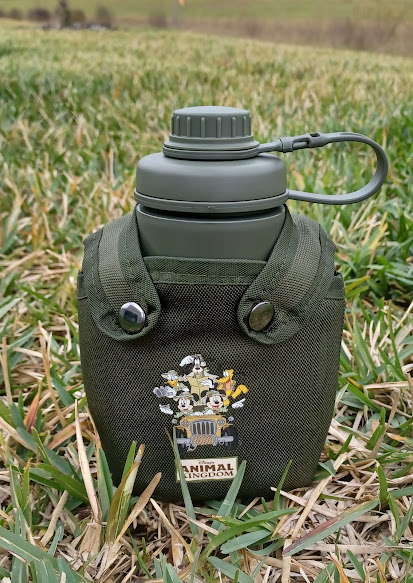 The canteen features a cute little logo of Mickey and Minnie with the rest of the Fab Five in a safari jeep, and while the canteen doesn’t have a convenient shoulder strap like Minnie, it does have a nifty loop on the back for strapping it onto your belt like a real explorer!