A pup recovering from surgery and receiving medication every few hours kept us tethered to our house over the Fourth of July holiday. Facing a stretch of three days of unstructured time, my son declared it a “Star Wars marathon” weekend.

He broke out the Galaxy’s Edge cookbook he’d bought me several Christmases ago, and paged through the recipes to find some dishes that would coordinate with his selection of movies, carefully linking recipes geographically and thematically to the films.  I readily agreed to his plan for the weekend, expecting him to pull out, at most, three or four recipes for the main meals of the weekend.  We ended up with a dozen recipes to test out. 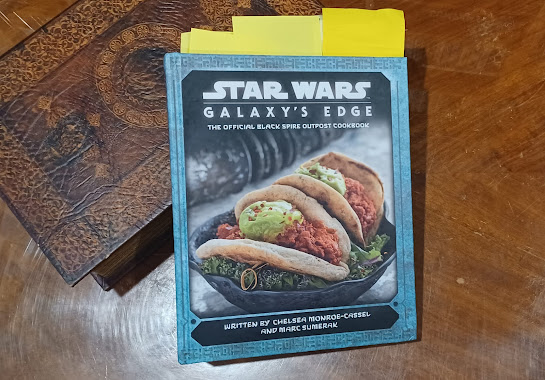 Our guide for the weekend’s culinary journey was Star Wars: Galaxy's Edge: The Official Black Spire Outpost Cookbook by Chelsea Monroe-Cassel and Marc Sumerak. It’s a fun book which has served us well in the past, with a few caveats (such as the fact that the Ronto Wrap recipe in the book looks, and tastes,  NOTHING like the delicacy you know and love from Batuu). Beautiful full color photos accompany the recipes, and origin stories and tales from Intergalactic cook Strono “Cookie” Tuggs are shared throughout.  Even if you aren’t a chef, the book is an entertaining read, and the recipes are offered at various levels of difficulty.

Armed with pages of instructions, bags of supplies, and new batteries in the remote control, we began our adventure. And almost came to a grinding halt.  Our first recipe was a disaster of epic proportions. For starters, the picture of the Sunrise Caf, a coffee-based drink, was photographed as a glass of basically black coffee.  Our finished product looked so different (and off-putting) that we thought we must have done something wrong, and we poured it out and started over. Attempt number two wasn’t much better.  The flavor of the drink was somewhat Christmasy, but the color was a kind of burnt orange and a touch on the oily side, due, we assume, to the coconut oil in the recipe. To put it kindly, it was not a success.

We tried a much more enjoyable beverage on the next round. The Coruscant Cooler was a sweet-tart blend with cranberry, dark cherry puree, bourbon, vermouth and lime juice, along with a viewing of The Phantom Menace. (In the parks, the Coruscant Cooler is $16.00 at Ronto Roasters.) 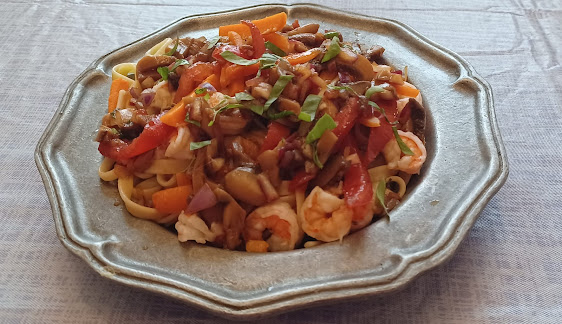 The Phantom Menace was followed up with Attack of the Clones, to which we added a serving of Moogan Tea, a chocolate milk and iced tea concoction that was much tastier than it probably sounds on paper! Dinner that night was an entrée of Yobshrimp Noodle Salad from Naboo, since that was where our movie was based, and it was delicious enough that we will offer it for dinner again in the future. The soy sauce and lime marinade gave it a bit of tang, and you can never go wrong with lots of chilled shrimp. 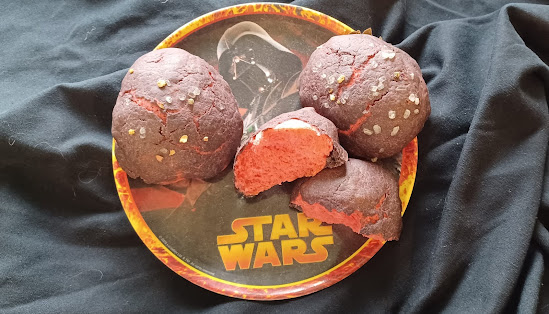 The next day found us queuing up Revenge of the Sith on the television, and lining up chicken and bread in the kitchen.  It was a much more fruitful operation, and the Fried Endorian Tip Yip and Mustafarian Lava Buns were well-received.  In fact, the Lava Buns will probably make their way into our regular dining rotation. They weren’t terribly difficult to make, and were kind of like a pretzel roll in flavor.  The hardest part was actually waiting for the dough to rise.  And the house smelled wonderful with all that yeasty goodness baking up. Plus, it was kind of fun to see the black outer shell of the bread crackle during baking to show the red dough underneath, looking just like a lava rock.  The addition of a few pinches of coarse salt to the outside of the dough also gave the “rocks” a bit of texture and sparkle.

Our libations during the movies that evening included the Blurrgfire, a lemony blend with pomegranate juice that was allegedly developed by one of the bartenders at Oga’s Cantina on Batuu, according to our book narrator. In the world of Hollywood Studio’s Oga’s, the Blurrgfire goes for $7.00. It’s normally served non-alcoholic, but we added a touch of watermelon rum to our version.

The Endorian Tip Yip was basically fried chicken strips served over mashed “chokeroot” (with artichoke hearts and parsnips) and a bright green “Gurreck” sauce made from lots of fresh herbs. As a note to those of you trying to order the Tip Yip at Docking Bay 7 in Hollywood Studios ($15.49), it’s a slightly different take than the cookbook. The park’s version has a mac-and-cheese side. (Chokeroot supply chain issues in the Outer Rim, presumably.) 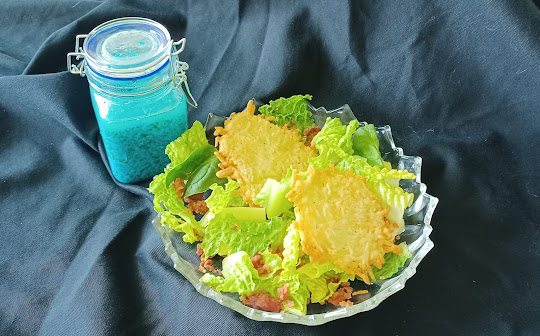 Our final day’s entertainment on the Fourth of July completed our marathon with the original trilogy of Star Wars movies, and a fancier dessert. We cheated a little on our main entrée, using the Pitmaster’s Choice as a burger, rather than as the longer-baked jerky it was meant to be, and paired it with a side of Xizor Salad with its blue Chadian dressing and parmesan crisps. 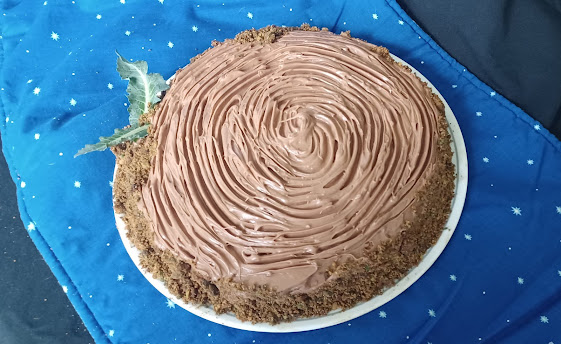 For dessert, we baked up the Wroshyr Tree Cake, a lovely chocolate frosted spice cake with crushed pistachio “moss” on the outer edges, designed to look like a section of a tree ring.  Accompanying the films were two non-cookbook recipes: the Yub Nub, a citrusy-pineapple drink, in honor of our Ewok friends in the movie; and Blue Milk, which a quick google search brought to us from the internet, rather than the Galaxy’s Edge book. (The on-planet Yub Nub comes in a souvenir glass at Oga’s in Hollywood Studios for $45.00!)

And in case you felt bad for us that we missed the various local fireworks’ shows, don’t be sad. George Lucas provided ample fireworks in the final movie of our marathon, Return of the Jedi. And we didn’t need to find parking or fight the crowds!