Disney’s Pre-Pandemic Strategy Reflected in Down Attendance in 2019

Earlier this month, the Themed Entertainment Association (TEA) released its annual report on global attractions attendance for 2019. While Disney obviously remained the theme parks powerhouse regarding attendance – with its various parks around the world pulling in an estimated 155.99 million guests – its overall attendance in 2019 actually declined slightly (falling by 0.8 percent) versus 2018. 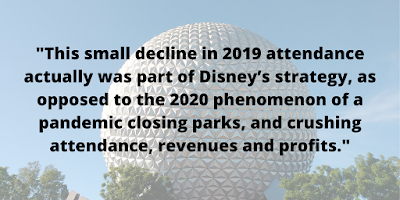 This small decline in 2019 attendance actually was part of Disney’s strategy, as opposed to the 2020 phenomenon of a pandemic closing parks, and crushing attendance, revenues and profits. As noted in the TEA report, “Disney’s domestic park attendance numbers were flat overall for 2019 compared to the previous year which could be attributed to the operator emphasizing its yield strategy by prioritizing the quality of guest experience and per caps. This operating model has emerged over the last decade and will likely serve operators well moving forward, with respect to capacity limitations in parks and the continued need to stay competitive.” Or, as stated in an Associated Press story, “The flat attendance is likely due to an effort by Disney to limit entry, while charging higher prices, so that visitors have a more enjoyable experience…”

• Disney World’s two water parks ranked one and two in terms of attendance among water parks in North America:

• In the Asia-Pacific region, Disney claimed four of the top ten parks in terms of attendance:

• In Europe, Disney claimed two of the top four spots in terms of attendance:

The Disney strategy of enhancing profitability by increasing prices, investing in park upgrades, and improving the guest experience wasn’t a secret, and the 2019 attendance numbers line up with this strategy.

The question now is, of course, what happens to such a strategy during and after a global pandemic? Barring a complete snap back in terms of attendance once vaccines and therapeutics reach the market, it would seem that, at least for a short period of time, Disney will need to offer more price breaks and slow some capital investments until attendance, revenue and profits return to where the company and its shareholders wish to see them.