Disney fans have been waiting in anticipation for the completion of the expansion of EPCOT’s France pavilion, sneaking peeks at the construction from aboard the Skyliner as it descends into the back entrance to EPCOT. 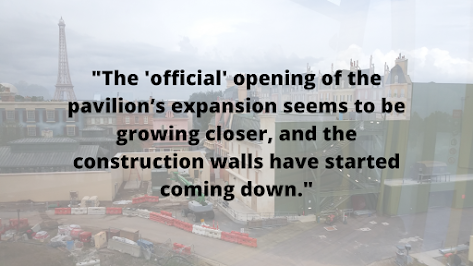 Not only will there be a new ride in “Remy’s Ratatouille Adventure,” but a new eatery will be joining some already stellar options in the land. The desserts at Les Halles are to die for, and L’Artisan des Glaces ice cream shoppe is a must-do. Our family has had several incredible celebratory vacation meals at the picturesque Les Chefs de France bistro while looking out on the cobblestone streets through floor to ceiling windows.

The “official” opening of the pavilion’s expansion seems to be growing closer, and the construction walls have started coming down. The new bathrooms and the walkways to Remy’s have just opened, so can the rest of the city be far behind?

While each of the lands in EPCOT has their own unique vibe, our family has always thought that France is one of the most beautiful of the pavilions. Having been to the “real” Paris many years ago, we appreciate the spectacular job Disney has done in capturing the feel of the landscape. Disney is all about the details, and in an Instagram posting this week, Disney Imagineer and Walt Disney World Site Portfolio Executive Zach Riddley explained some of the choices that bring that atmosphere to life in the new expansion.

“The first thing you’ll notice as you approach this new area is the ornate, Art Nouveau-style archway which is reminiscent of the iconic entrances to some of Paris’ Metro stations,” notes Riddley. “Made of cast-iron and displaying a ‘Ratatouille’ sign inspired by font used throughout the Paris Metro, the entrance to our new neighborhood instantly establishes both our setting and the exciting attraction that will await Guests around the corner. Just beyond the marquee, Imagineers designed a beautiful allée along the waterway. For those of you that have visited the city of Paris, this extension will take you right back to those wonderful strolls along the river Seine.”

If you take a closer look at nearly any Disney attraction, whether it’s in the Magic Kingdom, Hollywood Studios, or EPCOT, you’ll notice that there are multiple layers that create the magic. The sights, the sounds, and the smells all add to the illusion that Disney creates for their guests.  That is certainly true in the new France expansion as well. Textures and colors abound. Disney also strives for accuracy in their creations (hello, brown curvy sidewalk in Liberty Square…you know what I mean!) 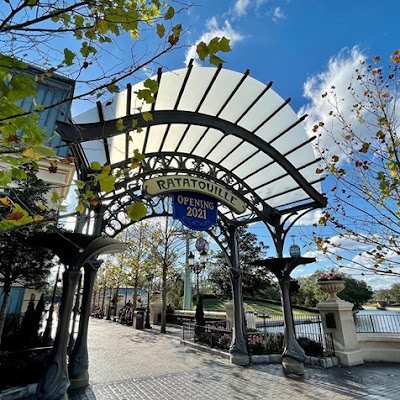 Riddley points out that in the new France area, “Historically accurate lampposts line a hardscape designed to look like decomposed granite, with cast-iron benches sitting adjacent to ornate wrought iron railings – each revealing subtle hints of Chef Remy in their design. We have paid attention to all the details – down to the exact species of trees, the materials, colors and signage. This is a small section in the grand design of EPCOT and even the forthcoming France pavilion expansion, but the details we are revealing are important when building upon stories of the real world and those inspired by it!”

“Remy’s Ratatouille Adventure” is based on the 2007 Disney-Pixar film Ratatouille and designed like the popular ride in Disney’s Paris theme park. Riders will find themselves shrunk down to the size of rats in a state-of-the-art trackless ride system, racing along frantically in rat-shaped vehicles, trying to outrun the chefs at Gusteau’s. In addition to the new attraction, guests will be able to enjoy the new La Crêperie de Paris, brought to EPCOT by the legendary Jérôme Bocuse, who along with his father, Paul Bocuse, created Les Chefs de France and the pavilion’s signature restaurant, Monsieur Paul. Remy’s ride and the crêperie are expected to open this year.