My Top 10 Reasons for Enjoying Disney

Why do so many people enjoy, appreciate or even love Disney? Well, there’s a lot to choose from, to say the least. 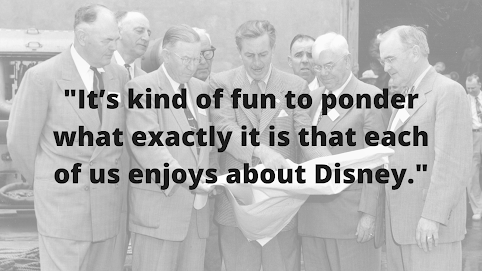 The size and scope of the Walt Disney Company – especially its intellectual property from a fan perspective – is vast. Just consider some of the company’s endeavors and vehicles, including Disney+, theme parks, theatrical movies, cruise ships, sports, television, books, hotels and resorts, and so much more. Therefore, more so than ever before (well, not counting our pandemic woes), you can have Disney fans who love everything under the Disney umbrella; fans that like some of the Disney universe and care little about other parts; Disney fans that have laser-like focus on only a few aspects of this entertainment juggernaut; assorted small businesses that have capitalized on various aspects of Disney’s own enterprises; and analysts, academics, writers, and YouTubers who assess everything that Disney does, with lots of speculation tossed into the mix.

So, it’s kind of fun to ponder what exactly it is that each of us enjoys about Disney. Here are my top 10 reasons for enjoying Disney, and for starting the DisneyBizJournal.com website.

2) Business and Storytelling. Most writers, I think, dislike the business side of writing. Indeed, that can probably be said about the majority of creators across industries. However, as a novelist and nonfiction author, I actually enjoy the business side of writing – thanks to being an economist, working with business owners, and teaching MBA students. I love both the creative aspects of storytelling and the business side of getting people interested in what I create. That was Walt Disney as well (of course, he did it far better than I ever could), and why he serves as an inspiration for me. Walt was a storyteller. He was an entrepreneur. And he was a businessman. That last role, I think, tends to get underplayed when talking about Walt, especially given that he was partners with his brother Roy O. Disney, who led the way in terms of financing the Disney enterprises. But make no mistake, Walt wanted to create and to tell stories, but he also understood the business aspects of spreading the word about his storytelling, and the importance of getting people to consume what was produced, from watching a Disney movie or cartoon to attending Disneyland.

3) Walt Disney World. Years ago, my wife and I went on our honeymoon to Walt Disney World, and it’s been a special place for me ever since. It certainly is a place to relax and have fun on vacation, and to enjoy time with family. Walt Disney World is a place of special memories, and a dynamic experience for which I look forward to the next visit.  Walt Disney World also has been a place that gets me thinking about how businesses serve customers, and operate on so many different levels.

4) Marvel – Comic Books. Do you recall how you first got truly excited about reading? I do. It was reading Captain America comic books from Marvel. Yes, it was Cap who provided the spark for me to read, and therefore, eventually to write. Marvel, of course, entered the Disney universe in 2009.

7) Star Wars. Star Wars also was purchased by Disney in 2012. I’ve long loved Star Wars, and my wife and I introduced Star Wars to our two sons when they were quite young. Of course, there has been a decades-long debate going on about what makes Star Wars so popular, not to mention heated discussions about the quality of various Star Wars productions. But understanding that a franchise covering movies and now streaming shows (yes, The Mandalorian absolutely rocks!) is going to have its up and downs, Star Wars has been amazingly resilient in providing enjoyable entertainment (and yes, again, Star Wars: Galaxy’s Edge in Walt Disney World is awesome!). Why so resilient? I wrote a review that, in passing, referenced my long-running internal debate over Star Wars versus Star Trek. I offer the following on this ongoing sci-fi debate, which also presents a brief explanation of why Star Wars continues to entertain (going deeper on this topic must be left for another time, alas):

When I was growing up and the Star Wars-vs.-Star Trek battle raged, I ranked as a Trek fan. However, while still appreciating Star Trek – particularly the Kirk, Spock and McCoy relationship in the original series and related movies – I gradually have become much more of a Star Wars than a Star Trek fan. Why? I came to an answer only recently. In the end, Star Wars has more heart than Star Trek…

So, what’s “Star Wars heart”? Well, in the lingo of “The Force,” it’s a feeling emerging from a combination of joy, adventure, courage, determination, optimism, humor, a willingness to sacrifice, and hope, along with characters whom moviegoers come to love.

8) Business and Hollywood History. My interest in history, economics and business coalesce quite nicely in the Walt Disney Company. The story of a business started in the 1920s by a creative entrepreneur; rising to prominence; facing failures and challenges along the way; and not just still standing, but remaining at the top of Hollywood in the 2020s, is endlessly fascinating to me.

9) Disney+. The changing landscape of the movie and television business also intrigues me as a movie lover, one who enjoys quality television, a consumer of sports, a storyteller, and an economist. And right in the middle of this dramatic transformation is Disney, not only with Disney+, but also Hulu and ESPN+.

10) Work and Fun. Finally, I have learned from my experience and faith to embrace one’s work and career as more than a mere job, but as a calling or vocation in which one serves others. Assorted individuals have served as examples – among the most prominent being Walt Disney – and have pointed out the fact that one’s work need not be a drudgery, but instead, it should be a source of value, fulfillment and, well, fun.

That’s my top 10 rundown on why I find enjoyment and value in the Disney universe. I’d love to hear yours as well.

Ray Keating is the editor, publisher and economist for DisneyBizJournal.com, and author of the  Pastor Stephen Grant novels and assorted nonfiction books. He can be contacted at  raykeating@keatingreports.com.