In the northeast, it’s not unusual for schools to bus students and scout groups to The Franklin Institute in Philadelphia for science-based field trips.  I’ve been on at least three to the location myself as a chaperone. 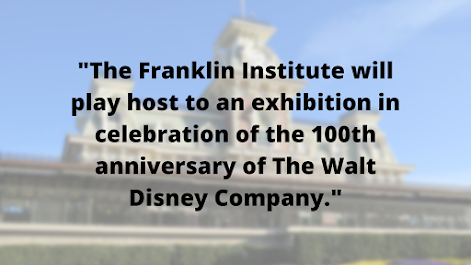 The Institute is part traditional museum, and part hands-on exploration for students, with the walk-through model of a giant beating heart among students’ favorites. In 2023, there may be a new favorite gallery for guests to visit.

D23, the official Disney Fan club, reports that hundreds of artifacts from The Walt Disney Archives’ extensive collection will be featured in the exhibit. As is often the case with The Franklin Institute’s other galleries, “The exhibition will feature an immersive environment of sight and sound spanning 15,000 square feet, showcasing stories and characters from The Walt Disney Company’s last century.”

The showcase promises to be an exciting one, with memorabilia, props, costumes and other works of art among the displays. According to D23, co-curator of the exhibit Paula Sigman Lowery noted that “many of these objects have never before been seen outside the company’s archival, animation, and Imagineering vaults.”

In 2019, SC Exhibitions worked in partnership with Studio TK on the “Marvel: Universe of Super Heroes” exhibit at The Franklin Institute, and the Disney 100th anniversary collaboration brings those two companies together again on this venture.

The Franklin Institute, located in Philadelphia’s Parkway Museums District, is one of the leading science centers in the country. It was founded in 1824 to honor Benjamin Franklin, and opened to the public as a museum in 1934. It was one of the first museums to offer a hands-on approach to visitors, and today is dedicated to science and technology education in a facility with more than 400,000 square feet of exploration space. The Institute includes the galleries, an IMAX Theater, a STEM education and conference center, lecture halls, and the Fels Planetarium, the second oldest planetarium in the western hemisphere.

More details on the new Disney exhibit will follow as the project gets underway.