The countdown to the soldout D23 Expo 2022 in Anaheim has begun, but Disney fans who weren’t fortunate enough to snap up tickets can still participate in the 3-day fanfest from the comfort of their own home. While the excitement level might not be the same, the livestreams will still help keep fans “in the know.”

Hosts Ashley Eckstein, Juju Green, Bret Iwan, and others will bring many of the panels and presentations, live interviews, celebrity moments, and special announcements to viewers from the show floor via livestream.  The streams will take place September 9, 10, and 11 starting at 10 a.m. PT. An ASL stream will also be available. 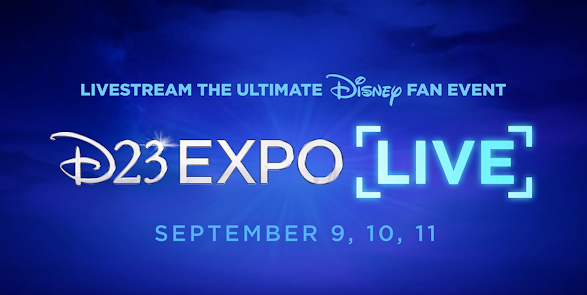 Marvel Comics: Celebrating 60 Years of the Amazing Spider-Man – 2 p.m.-3 p.m. – Join Executive Spider-Editor Nick Lowe and Editor in Chief C.B. Cebulski in a discussion about the comic’s history of the web-head across six decades—and BEYOND! Tantalizing trivia about the webbed wonder will be shared in this can't-miss panel.

The Making of Disney100: The Exhibition – 6:30 p.m.-7:30 p.m. – Producers from Walt Disney Archives, Semmel Exhibitions, and Studio TK reveal illuminating details about the all-new exhibition celebrating 100 Years of Disney Wonder, scheduled to premiere at The Franklin Institute in Philadelphia in February 2023.

A Boundless Future: Disney Parks, Experiences and Products – 10:30 a.m.-12 noon – Walt Disney Parks, Experiences and Products Chairman Josh D’Amaro will make announcements and updates on the magic happening around the world in parks, on the high seas, at home, and beyond. Every Disney fan will want to be a part of this presentation full of exciting news and surprises.

Walt Disney Imagineering: 70 Years of Making the Impossible, Possible – 1 p.m.-2:30 p.m. – Disney Imagineers past and present discuss the core elements of storytelling and innovation that bring dreams to life for guests from all around the world.

The livestream schedule and guest appearances are subject to change. For more information about the sessions, visit D23Expo.com.  The livestreams can be accessed at https://d23expo.com/live.