I must admit to feeling somewhat possessive about Coronado Springs as I watched various Disney Vloggers covering the Gran Destino Tower opening at Coronado in July.  Coronado Springs has typically been our home resort on many recent trips, and we’ve watched with anticipation as construction progressed not only on the tower itself, but on the mid-lake Three Bridges Bar and Grill.  I was a tad jealous when I watched the first guests unwinding in the open air ambiance of Three Bridges after a long day park hopping. 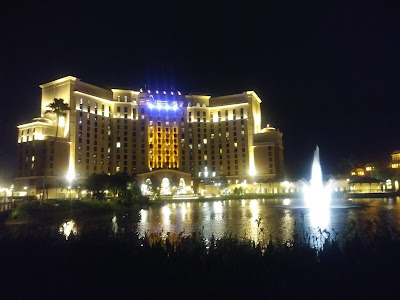 When we booked Coronado the first time, it was because we were unable to get reservations at the first three resorts we tried for (it was a busy time of year at Disney!), and I was undeniably disappointed going into the trip.  A Disney Cast Member on the reservations line had encouraged us to try Coronado, but Coronado’s reputation for being a “convention hotel” had me skeptical about what the experience would be like.  I loved all the “Mickey details” in the other resorts we’d previously stayed at, and was afraid those touches would be missing at Coronado.  As it turns out, the quieter pace, the soft Spanish guitar music in the background, and the overall relaxed tone suited us, and we returned to Coronado several more times.  Last year’s newly renovated rooms were comfortable and nicely decorated, and our end-of-summer trip was uninterrupted despite the looming cranes and numerous construction fences.

So, it was with some trepidation that we awaited the completion of the new tower after having seen the “work in progress.”  We were certainly looking forward to the installation of the bridges over Lago Dorado… having stayed at the Ranchos in previous visits. A quicker way to the main building was indeed welcome.  But those huge construction panels that were glaringly obvious during last summer’s visit had us worried that the new tower was going to be a giant eyesore on what was otherwise a very bucolic landscape at Coronado. The behemoth of a tower seemed massive against its surroundings.  And truth be told, our summer photos of last year’s construction evolution were ... ugly.

Holding our breath, we waited to see what the grand opening offered. When you set your eyes on the building in person, Gran Destino is visually stunning.  The videos from our favorite vloggers simply didn’t do justice to the beauty of the place.  The approach to the resort was impressive (no more ugly construction panels!), and the two-story resort lobby was magnificent. The colors are rich and vibrant, often jewel-like in tone when set against some of the more earthy tones of the walls and floors with their various metallic lighting and accent pieces.  Hidden amongst the architecture are subtle nods to the Salvatore Dali/Walt Disney collaborative film “Destino,” for which the tower is named.  A wall of photos pays tribute to the unexpected friendship between the two creators. 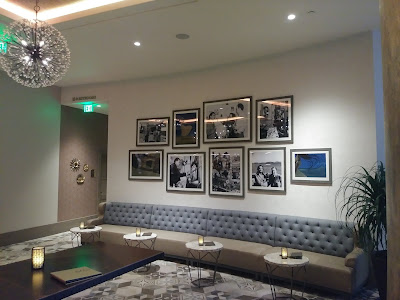 The interplay of light is a recurring design element at Gran Destino, from the curved color-changing ceiling of Toledo restaurant, to the mirrored walls and speckled granite of the countertops of Dahlia Lounge. The blend of Spanish influence with Dali’s surrealism creates a visually intriguing backdrop to the space – everywhere you look there are interesting shapes and colors to draw you in. 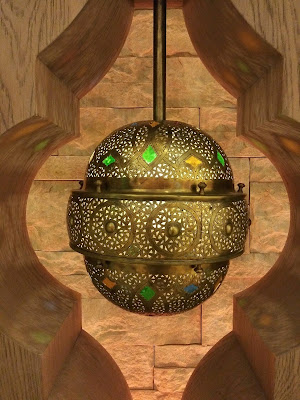 Unusual patterns abound, and provide a variety of contrasts in the space. Even the chandeliers suggest the wispiness of dandelion fluff blowing in the wind. 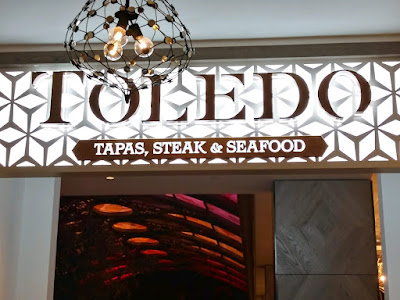 We booked an evening dinner reservation at a time that we hoped would allow us to see the various Epcot and Hollywood Studios fireworks visible from the 16thfloor rooftop setting of the new Toledo restaurant.  While we could see some of the fireworks from our dining table, reflections from the lights inside the restaurant didn’t quite allow us to see what we wanted to.  We stepped outside to the balcony to finish watching the shows.  (Depending on the time of year, showtimes for the various evening performances at the parks can start as early as 8:30 and last until after 10:00 pm.)  Our suggestion is to book a slightly earlier dinner reservation, allowing you to finish dinner before the fireworks start, and then grab your favorite beverage and relax on the cushioned sofas of the outdoor balcony at the adjacent Dahlia Lounge. It was a relaxing way to wrap up our day, and the outdoor seating at Dahlia Lounge was cozy, and the evening breezes at this height were a welcome relief to the heat of the Florida summer.

The fireworks view at night is spectacular. But the daytime view, which we arrived just in time to see before watching the sun setting over the House of Mouse, is just as impressive.  It was fun to see the different parks from high above, and we got a sweeping panoramic perspective of the newly opened Galaxy’s Edge, which was only in its first week of occupancy.  Picking out iconic ride landmarks from the tower balcony was a new twist on the competition to find Hidden Mickeys.

The menu at Toledo is wide-ranging, from tapas-style smaller plates to full-sized entrees. We started our meal with the charred octopus, served with a chimichurri sauce, and a unique twist on the traditional theme park churros – these churros were twisty, soft and pillowy rather than the more typical crunchy style.

For our entrees, we went with golden tilefish, slightly crispy on the outside but moist and flaky on the inside; some of the best scallops we’ve ever had; and a tender Manhattan filet of beef. 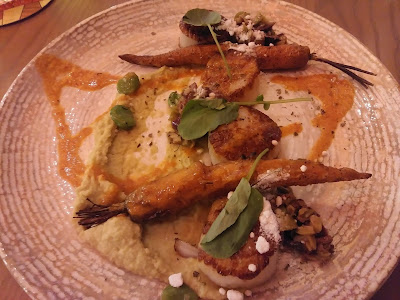 Desserts also were good, but the favorite by far was the “Toledo Tapas Bar,” which our waitress explained was not only a progressive tasting of five different flavors ranging from coffee to chocolate, raspberry, lemon and cheesecake, but represented the colors of the Spanish Flag and Mickey Mouse! 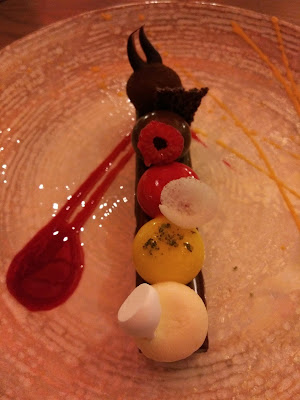 So, along with the delicious meal at Toledo, I was forced to eat a helping of “I was wrong” with my meal.  The Gran Destino Tower is a lovely addition to Coronado Springs, and I’m looking forward to going back to spend a relaxing evening in front of the fire pit at Three Bridges sometime soon. Can’t wait to watch the lights sparkling on Lago Dorado at night!

5) Pre-order my next book – FREE TRADE ROCKS! 10 POINTS ON INTERNATIONAL TRADE EVERYONE SHOULD KNOW – at Amazon.com for the Kindle, or signed books at https://raykeatingonline.com/products/freetrade.