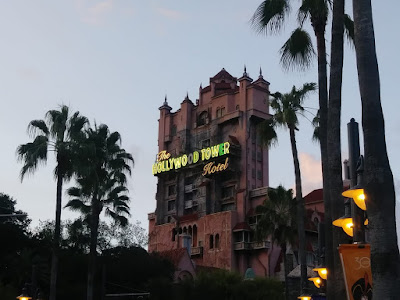 I appreciate the look of the ride from the outside – especially the seemingly neglected building and “The Hollywood Tower Hotel” neon sign – and the inside includes the decaying, cob-webbed lobby, the spooky boiler room, and of course, the thrill of the ride’s big drops.

But there’s also the appearance of Rod Serling to welcome us into this mysterious, scary setting, just as he did with his television show The Twilight Zone. In fact, given my interest in classic Hollywood – both movies and television – Serling makes a big difference for this ride. 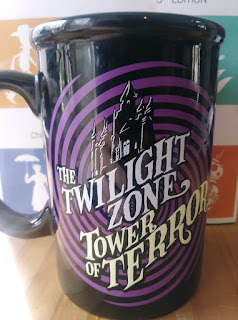 Interestingly, Rod Serling’s introduction in the Tower of Terror attraction came, in part, from a 1961 episode titled “It’s a Good Start.”

Don’t get confused, though, Disney doesn’t own The Twilight Zone. It’s actually a CBS thing. But Tower of Terror is enough of a Disney link for me. And this past week, on November 14, I journeyed to the movie theater for a 60th anniversary celebration of The Twilight Zone presented by Fathom Events. The line-up featured six digitally remastered episodes, and a short documentary on Serling.

Fathom Events offered the following rundown on the episodes:

Walking Distance: Martin Sloane, a VP of an ad agency, stops his car at a gas station when he realizes he is 1.5 miles away from Homewood, the town he grew up in. He decides to walk there and finds that he has returned to the past... Season 1 episode 5 – aired 10.30.59

Time Enough at Last: Henry Bemis loves to read but he can find neither the time nor the place to enjoy his pastime. After sneaking down the vault in the bank's basement to read and emerges to find the world destroyed. He sees a great deal of reading time ahead of him. Except for one small unintended event. Season 1 episode 8 – aired 11.20.59

The Invaders: An old woman who lives alone in a ramshackle farmhouse comes face to face with alien invaders, however, the nature of the invaders is not immediately obvious. Season 2 episode 15 – aired 1.27.61

The Monsters Are Due on Maple Street: After an unexplained occurrence happens to the residents on Maple Street, a series of events causes paranoia and pandemonium to set in, and the neighbors on Maple Street to turn against each other. Season 1 episode 22 – aired 3.4.60

Eye of the Beholder: Janet Tyler is in hospital having undergone treatment to make her look normal. Her bandages will soon come off, all that to say that truth is in the eye of the beholder. Season 2 episode 6 – aired 11.11.60

To Serve Man: Michael Chambers recounts recent events on Earth after the arrival of an alien space craft. Chambers attempts to decrypt a book the aliens left behind. The book's title seems benign - but it's not what they think. Season 3 episode 24 – aired 3.02.1962

I was pleased that I actually had not seen two of these episodes – “Walking Distance” and “The Invaders.” “Walking Distance,” starring Gig Young, was excellent, with Serling tapping into time travel and nostalgia, while “The Invaders” was interesting for the lack of dialogue from the main character, and the twist at the end.

“Time Enough to Last,” with Burgess Meredith, has become one of the best known Twilight Zone episodes, and deservedly so. “The Monsters Are Due on Maple Street” serves up a frightening take on how close human beings are to devolving into a mob, and “Eye of the Beholder” employs lighting and camera angles in interesting ways, while Serling got to say some things not just about true beauty and what matters, and segregation, but also totalitarianism. And finally, “To Serve Man” shows The Twilight Zone with a sense of humor.

Finally, there were plusses and minuses in the documentary. Some of the talking heads were interesting; others not so much. The best parts were clips of Serling talking to students at Ithaca College about writing. Give me more from Rod Serling on writing, please!

Yes, this journey into The Twilight Zone has me thinking not only about returning for another spin on Tower of Terror, but also putting the Blu-ray of the complete series of The Twilight Zone on my Christmas list.

Ray Keating is the editor, publisher and economist for DisneyBizJournal.com, and author of the Pastor Stephen Grant novels. He can be contacted at  raykeating@keatingreports.com.
Posted by Ray Keating at 9:15 AM