Is it more expensive or cheaper to enjoy a day at Walt Disney World today versus when the theme park opened 50 years ago?

Come on, the answer is obvious. Right? It’s gotten a heck of a lot more expensive. Well, yes. However, that “yes” must include a couple of big “buts.” 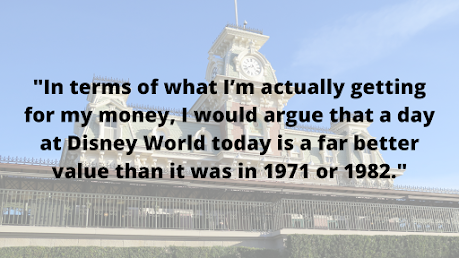 The Orlando Sentinel on March 31 offered a handy rundown on prices at Walt Disney World when it opened in 1971.

Currently, one-day tickets at Magic Kingdom, Hollywood Studios, Epcot and Animal Kingdom start at $109 for ages 10 and older, with prices varying by day. That price, of course, effectively includes everything happening in the park except for your food and merch purchases.

The Sentinel noted that in 1971, the price of admission was $3.50 for an adult ($1 for a child), with additional costs for rides. There was a package deal that covered admission and seven rides, which came in at $4.75. Ride packages could be purchased – A-tickets up to E-tickets – covering smaller rides to the biggies, with prices ranging from 10 cents to 90 cents.

Let’s assume that when I showed up in 1971, the full experience was desired, so I bought the admission-seven-ride ticket, plus one of each of the A-E ride tickets. That means I was shelling out $7.25. That’s a lot cheaper compared to at least $109.

Well, hold on, the dollar is worth much less today than it was in 1971 given the toll inflation has taken over the last 50 years. After adjusting for inflation, it turns out that $7.25 in 1971 is the equivalent to $47 today.

By the way, additional tickets for rides were eliminated and Walt Disney World moved to all-attractions admission pricing, set at $15 when EPCOT opened in 1982. That’s equal to $41 today.

So, even after accounting for inflation, visiting a Disney World park is still more expensive today than in 1971 or 1982. Yes, but then we have to consider the value question.

It’s not a stretch to say that a visit to a Walt Disney World theme park today offers more value to guests than 40 or 50 years ago. Has that value more than doubled? That’s a decision each consumer has to make. As for me, I don’t think it’s even close. A day at Walt Disney World generates multiple times the value today versus 1971 or 1982. In terms of what I’m actually getting for my money, I would argue that a day at Disney World today is a far better value than it was in 1971 or 1982. (By the way, I understand that this doesn’t include other costs such as hotel rooms, parking etc., but we’re just comparing park costs right now.)

At the same time, of course, that doesn’t mean that $109 for a day for each person in the family at a theme park, even Walt Disney World, isn’t expensive. It is. But, again, the increase in the value of the experience has run ahead of the price of admission over the years – at least it has for me.