So, it wasn’t exactly surprising to see that Disney ranked eighth best in terms of its corporate reputation, according to the recently released 2021 edition of The RepTrak Company’s “Global RepTrak 100” report. RepTrak publishes its top 100 ranking “based on 68,577 respondents collected globally across the 15 largest economies through online surveys.” 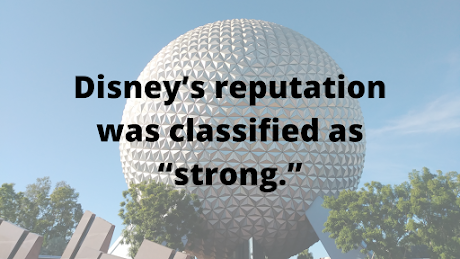 Disney’s reputation was classified as “strong.” RepTrak explained: “Over the past decade, The Walt Disney Company has consistently ranked in the Top 10 most reputable companies - one of only two companies to do so. In 2021, The Walt Disney Company is the only Media & Entertainment company within the Top 10. Disney is also one out of only two companies among the Top 10 to receive an ‘Excellent’ Reputation Score when it comes to its Financial Performance.”