Disney’s Candlelight Processional and the Reason for the Season

I love all aspects of the Christmas season, from Santa Claus to the decorations to the holiday movies to the catchy secular songs. And now that I live in the Walt Disney World area, I enjoy the holiday trimmings at theme parks, resorts and Disney Springs.

But amidst all of this excitement, it can be easy to forget what Christmas is all about in the end. That is, the birth Jesus Christ, the Incarnation, so that He would offer the world love, forgiveness, redemption and salvation. I appreciate how St. Augustine of Hippo (354-430), long ago in a sermon, described the meaning of the birth of Jesus Christ: “He lies in a manger, but contains the world. He feeds at the breast, but also feeds the angels. He is wrapped in swaddling clothes, but vests us with immortality. He found no place in the inn, but makes for Himself a temple in the hearts of believers. In order that weakness might become strong, strength became weak.” 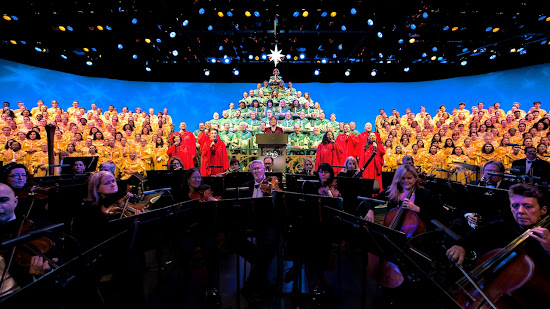 To Disney’s credit, one of their central celebrations during the holiday season that has been maintained over the decades is the Candlelight Processional.

The Candlelight Processional started in Disneyland in 1958, where it continues, with a Florida version kicking off with the opening of Walt Disney World. It moved from the Magic Kingdom to EPCOT in 1994, where it is held in the American Gardens Theater across from the American Adventure pavilion.

On its website, Disney World offers the following description: “Each night, a celebrity narrator tells the story of Christmas, recounting the biblical tale of a savior born in Bethlehem. Woven into the production are stirring songs of hope and joy performed by the orchestra and massed choir.” That’s exactly right, and it is a delight.

While the choir and the orchestra present wonderful renditions of more secular Christmas songs at the start and the close of the event, the main emphasis involves the narrator reading part of the biblical account and then a traditional Christmas hymn being sung. The audience is treated to this moving back-and-forth between Scripture and song. It truly is moving.

My family attended twice this year, with Alton Fitzgerald White and Andy Garcia as the narrators. Each had his own splendid style, while communicating the sacredness of the story.

Among White’s credits are being the longest “King” in Broadway’s The Lion King, as well as a long list of television appearances, from Law & Order to Bull. Meanwhile, Garcia’s work has included The Untouchables, The Godfather: Part III, the three Ocean’s movies, and forthcoming The Expendables 4.

As for the remainder of the EPCOT Candlelight Processional this season, the scheduled narrators are:

I can’t help but think about what it would have been like to hear some of the great actors of all time who have served as narrators of the Candlelight Processional, including Cary Grant, Jimmy Stewart, John Wayne, Gregory Peck and James Earl Jones.

A stirring reading of the Christmas story, that is, the reason for the season. A grand choir. And a mighty orchestra. Beloved hymns. Yes, the EPCOT Candlelight Processional is a wondrous holiday treat that I heartily recommend to all.

Check out other DisneyBizJournal articles on the Candlelight Processional…