I know the news on what The Walt Disney Company plans to spend on content during its fiscal year 2022, which began on October 1, is not exactly new. It was released in late November. However, it’s taken a couple of weeks for the numbers to truly sink in with me. 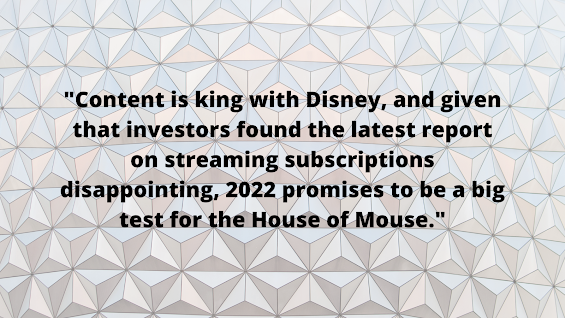 Now, this number isn’t just about Disney+. It covers Disney’s streaming, linear and sports programming. However, the increase seems to be all about streaming, that is, Disney+, Hulu and ESPN+.

It was noted in the company’s 2021 annual report that the company would be producing 50 titles (both movies and episodic series) for theater and streaming releases. Also, it was reported that its General Entertainment division would be producing 60 unscripted series, 30 comedy series, 25 drama series, 15 docuseries/limited series, 10 animated series, 5 made for TV movies, and numerous specials and shorts.

While not a strictly apple-to-apples comparison given Disney’s greater variety of outlets, it has been reported that Netflix plans to spend about $17 billion in 2022 on content, and WarnerMedia, post-merger, is looking to spend $20 billion each year.

Also, in April 2021, Amazon’s annual report showed that the company spent $11 billion on movies, episodic series and music for its Prime services in 2020, and that was up from $7.8 billion in 2019.

Content is king with Disney, and given that investors found the latest report on streaming subscriptions disappointing, 2022 promises to be a big test for the House of Mouse.