When you come to Disney World on vacation, you typically only have a few days to sample the various restaurants around the world. That means, by and large, that you tend to go back and visit the favorites over and over again, or, if you were up really early and the stars were aligned just right, you were able to snag a coveted advanced dining reservation for the exciting, newly opened venue about which everyone has been talking. Rarely do people venture off to try some of the lesser known spots, unless they haven’t been able to get their earlier choices.

That was always the case with us. We’d talked about trying a half-dozen or so other restaurants on our short list over time, but between eating our way through festivals and returning to our favs, we just never seemed to find a spot in our limited time at the parks to venture further afield.

Last week, we finally made it to one of our “You know, I’d really like to try…” restaurants.  (And in all honesty, it got bumped to the top of the “like to try” list because it was home to one of the specialty desserts that was available for the 50th Anniversary of Disney World. But more on that later.)

We decided to finally pay a visit to La Hacienda de San Angel in EPCOT’s Mexico pavilion. You would be forgiven for being confused as to which restaurant that is exactly because, Disney for some reason, gave all of its Mexico eateries similar names.  There’s the San Angel Inn Restaurante (the table service restaurant in the pyramid); La Cantina de San Angel (the quick/counter service known for their tacos and empanadas); and La Hacienda de San Angel, also a table service locale.  (Why, oh, why, does Disney do that with names of locations?) Even my son asked, about six times that day, “Which one are we going to again?”

La Hacienda de San Angel specializes in authentic Mexican cuisine, and is also known for their selection of margaritas, including the frozen Black Magic ($21), created by Neil Patrick Harris especially for Disney. It offers up Ojo de Tigre mexcal, blackberry purée, black currant liqueur, lime and mint. Other margaritas on the menu range from $15-$23.

The corn tortillas at La Hacienda are house-made each day, and you really could taste the difference in the care that was taken to make that happen. The moment you lifted the covering over the tortillas, the scent alone told you it was fresh and homemade.  Accompanying many of the dishes were a variety of delicious fresh salsas.

Chips, salsas and queso ($6.00) were available among the starters, but we opted for the Flautas ($14.25), a trio of tortillas filled with chipotle chicken, potato, cheese, and Ranchera sauce. They were delicious, with a crunchy outer shell, a delightfully creamy filling on the inside, a sprinkling of cotija cheese, and a not-quite spicy sauce drizzled on top.  We would welcome those starters again. 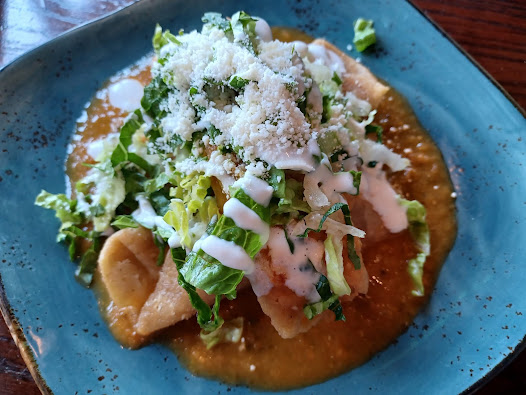 One of our diners, a “spice adverse” guest, requested the Pollo Poblano ($30) for their meal. The entrée featured a tender and moist roast chicken breast atop a pool of poblano cream sauce. The poblano sauce had just enough heat to retain its qualification as traditional Mexican food, without scaring away a diner who wasn’t keen on too much spice. The fact that the chicken was served on top of the sauce also made it easy to decide exactly how much sauce should be scooped up on each bite. The chicken was served with a side medley of brussels sprouts, sweet potatoes, and oyster mushrooms, along with a set of the warm house-made corn tortillas, in case you wanted to eat your veggies and chicken “taco” style. 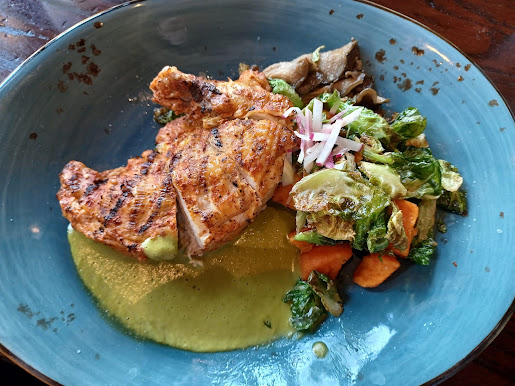 Two in our dining party opted for the Tacos de Langosta ($35), the fried lobster in flour tortillas, served with shredded cabbage, chipotle aïoli, and mango relish.  This set of three made for an excellent main course. The fried lobster was rather unique, some crunch on the outside, with tender and flavorful lobster meat inside. Indeed, each taco offered an ample amount of lobster, and the lobster taste wasn’t lost amidst the sauce, which offered a slight kick, and other accompaniments. And yes, the tortilla shells were soft and fresh.

A large bowl of white rice and beans was also brought to the table along with the entrées, and while it didn’t have much flavor on its own, it served as a nice blank canvas to add goodies from our entrée plates, scooped into the tortillas with our lobster tacos.

And, at last, we come to the real reason we were tracking down a reservation to La Hacienda on this particular visit. La Hacienda de San Angel is one of two locales for a spectacularly created 50th anniversary dessert that has been calling us since Disney introduced it in October.  The Chocolate “Fiesta” Pyramid ($34) is a celebratory, molded-chocolate pyramid filled with Mexican chocolate mousse and toffee, perched atop a traditional Tres Leches cake.  And in case that doesn’t sound decadent enough, each corner of the pyramid boasts a scoop of high quality vanilla ice cream, drizzled with a caramel sauce.  Oh, my!  Our very attentive waiter, Miguel, brought large soup spoons to crack our way to the interior of the pyramid to get to the rich, dark mousse, and breaking open the pyramid like a tiny piñata is part of the fun. The Tres Leches layer was closer to a pound cake than the custard-and-milk-soaked version you may have had elsewhere in the past, but it probably needed to be a bit firmer to support the weight of the seven-inch high chocolate building. 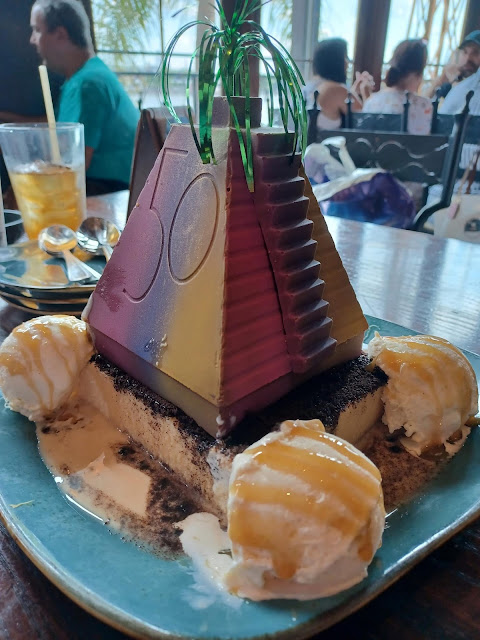 Disney claims the pyramid is “perfect for sharing,” but I think they had more than just our party of three in mind when they constructed this tower.  We managed to make a pretty big dent in the confection, but there was still more than enough for at least two or three more diners to join us in a sugar fest.  (If you want to embark on this journey with your own familia, the pyramid is also currently available at San Angel Inn Restaurante, as well as at La Hacienda.)

The restaurant only opens at 3:00 pm each day, and if you time it just right and ask nicely, you might be treated to a waterfront table where you would be able to watch the nightly Harmonious fireworks show while enjoying your meal.

We may have come to La Hacienda de San Angel for the Fiesta Chocolate Pyramid, but we’ll be back again for their delicious Mexican food. We’ll move this restaurant from the “like to try” list, to the “we’ll be back again” list.