We had stopped by the Polynesian Resort at Walt Disney World a number of times over the past few years, usually heading to Pineapple Lanai to test out whatever new flavor of Dole Whip was in the offing. Oddly, though, Pineapple Lanai was the only Polynesian Resort eatery we’d been to in more than twenty years, ever since we’d been to a wedding reception at ‘Ohana.  Last weekend, we decided to rectify that oversight.  We were able to get a later-in-the-evening reservation at Kona Café. 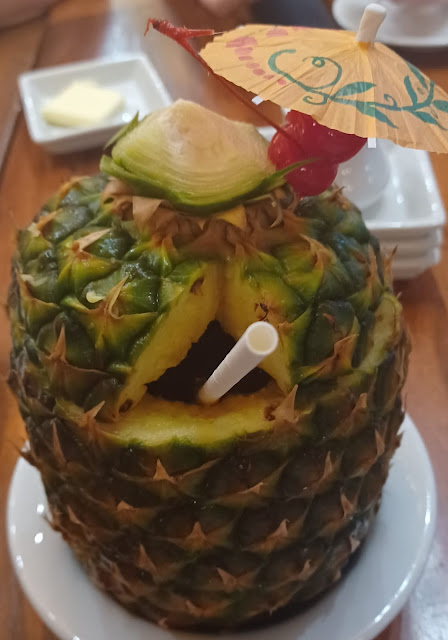 The restaurant is a casual table service spot serving up a South Pacific vibe with Asian influenced cuisine, anchored by an onstage sushi kitchen. It’s a higher energy venue during most of the day, owing to the fact that the room is open to the entire second floor of the Polynesian’s busy Great Ceremonial House. High, soaring ceilings help raise the volume of the room, so if you are looking for a romantic date night, this is probably not the place.  The Moana Mercantile, ‘Ohana restaurant, and Tambu Lounge surround Kona Café on the other arms of the second floor square, and the entrance to the monorail station is just a few hundred feet away.

Perhaps best known for its breakfast specialty, the much-loved cinnamon and banana-stuffed Tonga Toast, we opted instead to try Kona for a dinner reservation.  Among the fresh sushi rolls, poke bowls and Dashi noodle bowls were Kona coffee-braised short ribs, a deconstructed Pan-fried Mahi BLT (served more like a Mahi tower), and a series of variously flavored small dessert glasses.

We started off our dinner with another of the Kona Café’s specialties, the delightful Lapu Lapu ($19.00), a fresh, hollowed out pineapple filled with Plantation Original Dark Rum, Gosling's 151 Rum, and tropical fruit juices. It packs a bit of a punch, but you can’t beat the presentation for getting into a relaxed island vibe.  A number of other fruity, tropical libations are also available.

While we were waiting for our starters, our cast member brought over a plate of soft, warm Hawaiian rolls with butter, a welcome addition to the table. 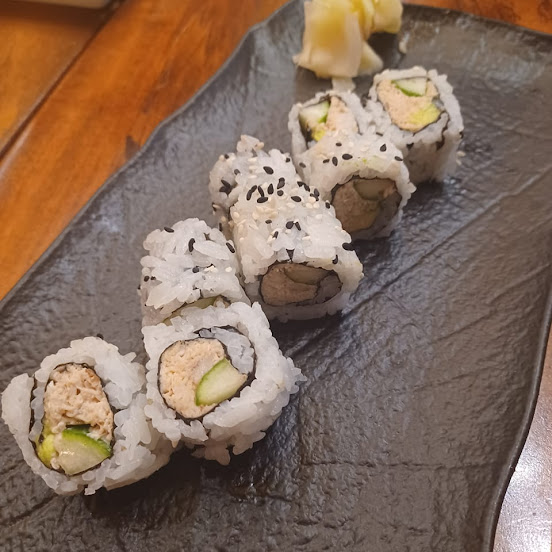 Since we were at Kona Café, and they are known for the freshness of their sushi, which in fact you can watch being hand-rolled in the onstage kitchen, we opted for the California Roll ($18.00), a combination of jumbo lump crab, citrus mayonnaise, cucumber, and avocado. It was delicious and hit the three F’s of quality sushi – firm, fresh and flavorful. 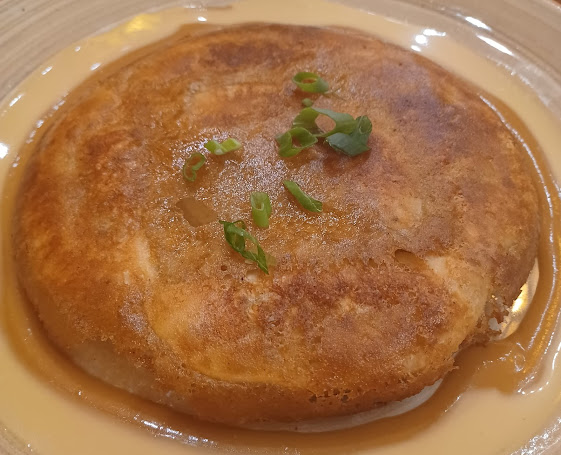 We also selected the Crispy Pork-Vegetable Pot Sticker ($10.00), a set of five, tender-on-the-inside, crispy-on-the-outside dumplings that were deceiving when they arrived at the table. The soy-vinaigrette dressing had just a tiny bit of a tang, and was artfully drizzled around the circumference of the plate.  Most surprising?  The pot stickers were hidden at first. A layer, almost a “lid” of melted cheese, covered the pot stickers, and when the dish arrived at the table, it appeared as if it was one large pot sticker.  When you flipped the cheese layer over, however, there were five savory dumplings waiting underneath.

Our dining party then chose the Rainbow Roll ($24.00) with tuna, salmon, shrimp, hamachi, lump crab, cucumber, and avocado as an entrée. Here again all of the key points of fine sushi were hit just right, and the varying flavors from piece to piece – from sweet to salty, and smooth to a little snap – were a delight for the taste buds. 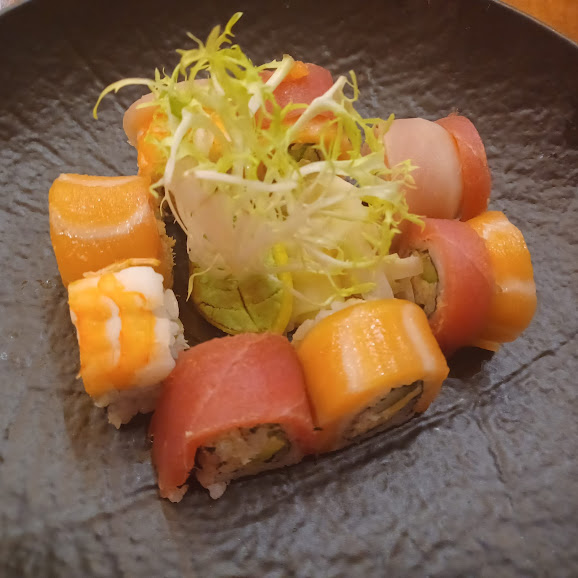 A second diner selected the Pork Belly Noodle Bowl ($24.00) for their dinner. A large bowl of bone broth, rice noodles, soy egg, mushrooms, bok choy, julienned carrots, and hot sesame oil, it was impossible to eat the whole bowl. The broth itself was a bit spicy, but with an earthy, deep afternote. There was a slight bite on the follow-through, and the small dices of pork belly were just a bit chewy, but still flavorful.  The rice noodles were yummy, and “softer” as a noodle than the ramen noodles that are more typically seen in a noodle bowl. 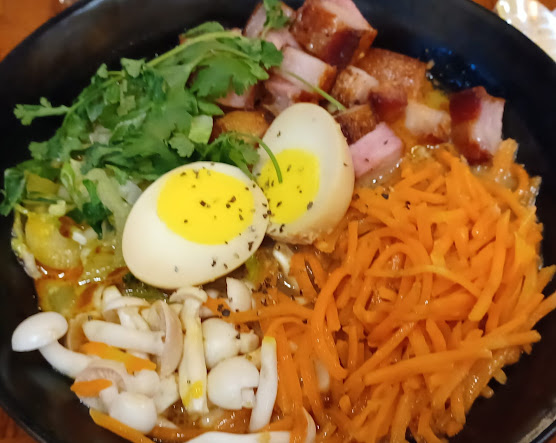 Diner number three, NOT a seafood eater, chose instead the Crispy Cheddar Burger ($21.00), a very much out-of-the ordinary burger. This delicious burger had a Polynesian flair to it, dished up with a crispy Cheddar disc as well as some melty cheese on the burger itself; two thick slices of brown sugar bacon that had a peppery edge, yet were still nice and chewy; two slices of roasted tomato; and a large, braised onion. The burger was set on a soft, toasted bun (probably a Hawaiian roll, since there was a touch of sweetness to it), and was served with a side of perfectly crispy, nicely salted, very skinny French Fries. Definitely a burger worth coming back for again, a true achievement, given that non-seafood dishes usually are an afterthought at a predominantly sushi restaurant. 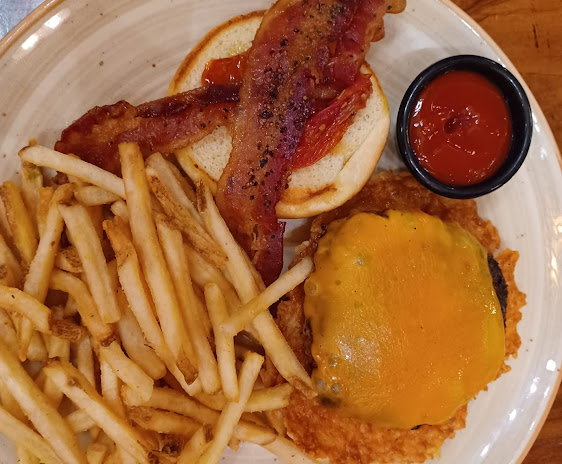 We wrapped up our evening with an off-the-menu dessert, but one that came highly recommended by our cast member – we tried the Pineapple Bread Pudding ($12.00), famously served across the atrium at ‘Ohana, and revered the world over.  This slice of heaven was enormous, and nothing like any bread pudding you’ve ever had before. Share it, because there is simply no way you are finishing a piece by yourself. Its soft, cake-like consistency was not overly sweet, and much of the sweetness from the dish came from the caramel sauce drizzled over the top of the rich, thick scoop of vanilla ice cream.  (And speaking of the ice cream, as it melted into the warm bread pudding, it created yet another whole flavor profile.). Tiny bits of pineapple were scattered throughout the moist cake, and if you didn’t already have plans to come to this restaurant for the great sushi, it would be worth a late night stop on your way back from the parks just for this dessert! 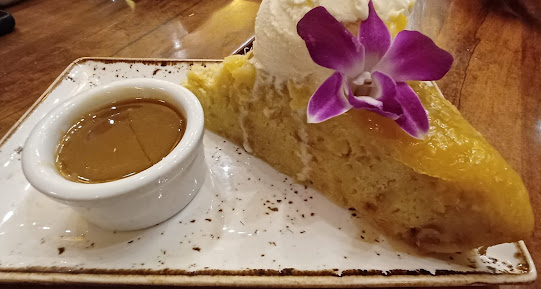 If you time your meal right, you can meander outside to the Polynesian’s sandy beach after dinner, and have a seat while you watch the Magic Kingdom fireworks above the castle. The Polynesian thoughtfully pipes the music onto the beach for you, and it makes for a magical end to the evening.