Disney Not Immune to Economy-Wide Issues

Walt Disney World might be the “Most Magical Place on Earth,” but that doesn’t mean that it can wave a magic wand and make economic realities disappear. Just like businesses across the rest of the economy, the challenges of supply chain woes, inflation and tight labor markets affect Disney.

The Orlando Sentinel provided a reminder in a May 27 article focused on the tight labor market resulting in staff shortages at Orlando-area theme parks, including Walt Disney World, just as the summer tourist season is gearing up. Although the details point to an improved situation compared to where companies were a short time ago. 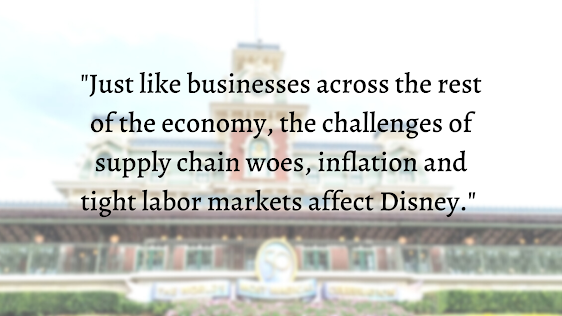 The Sentinel reported, “Dennis Speigel, CEO of International Theme Park Services, estimated that Walt Disney World, Universal and SeaWorld are at about 85% to 90% staffing numbers in 2019. These levels are stronger than anticipated and a big improvement from early 2021, he said, but staffing still looms large.” Spiegel went on to call it the “biggest issue facing the industry.”

Regarding employment levels, it was noted that pre-pandemic Disney World employed approximately 77,000 individuals. The Sentinel said that an “unnamed Disney spokesperson” said that current employment was at 70,000, while another estimate put the number at 58,478.

The Sentinel report looked at enticements to get new hires, including more pay, hiring bonuses, assorted benefits such as free tuition benefits (which Disney offers), as well as addressing housing costs, with Disney and Universal planning “affordable housing developments.”

The report also pointed out that increased automation certainly was on the way. And there was a warning as well: “Businesses have to be careful in raising employee wages, which typically make up 40% to 50% of operating expenses for theme parks, Speigel said. Companies can overextend themselves, like Ohio’s Cedar Point did when it had to roll back starting wages from $20 to $15 an hour less than a year after raising the rate.”