Several weeks ago, I was at the Magic Kingdom trying to get lunch. It was one of those days when mobile ordering was just not working, with lousy WiFi signals squashing any hope of getting through to the menus.  When I finally got the page up and running after many refreshes, most of the places had waits that were hours away.  I gave up, and walked up to The Lunching Pad in Tomorrowland. 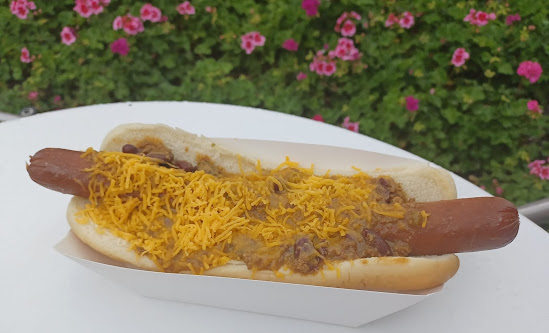 While it wasn’t my original plan, the line at The Lunching Pad was short, and I could grab something quick and move on with my day. I selected one of the 50th Anniversary specialty items: Walt’s Chili-Cheese All Beef Foot-Long Hot Dog ($13.99). The hot dog was huge, more than filling, and the chili was tasty and not overly spicy. The only drawback was the fact that the chili made the roll a tad soggy by the time I got to the end of the meal.  It was a messy, need-extra-napkins meal for sure.

Fast forward to this weekend, when I was flipping through my dog-eared copy of Cooking with Mickey (Gourmet Mickey Cookbook) Volume II: The Most Requested Recipes from Walt Disney World and Disneyland. (It was published somewhere around the year 2000, but there’s no actual copyright date in the book.)  I came across a recipe for Walt’s Own Chili and Beans, and the description under the recipe reads “Walt Disney’s Personal Recipe.”

I was intrigued by the possibilities, as so many of the chefs at Disney have offered up special variations on Walt’s chili in honor of the 50th Anniversary of Disney World.  (Tradition has it that chili was one of Walt’s favorite meals.) If you are in the parks yourself, and want to do a “Walt’s chili crawl,” head over to Casey’s Corner or Cosmic Ray’s in the Magic Kingdom, where you can get the same Walt’s chili-cheese dog that The Lunching Pad dished up. Cosmic Ray’s also offers the chili over fries for $6.49, as does the Golden Oak Outpost.  The chili fries and hot dog are available in Animal Kingdom at Restaurantosaurus, and if you are in Animal Kingdom anyway, try the Corn Chip Pie with Walt’s Chili for $8.49 at Dino Diner (the dog is available there, too.)

In the Resorts? Head over to the All-Stars or Pop Century, where you can get Walt’s chili in a bread bowl ($9.99). The chili dogs are there as well. At Capt. Cook's at Disney’s Polynesian Resort, you can get Walt’s Favorite 1958 Chili for just $4.99! So, as a little experiment, I decided to give Walt’s recipe in the Cooking with Mickey cookbook a whirl, and see if it was the same as the current recipe in the parks.  The flavor was pretty close to the parks’ version, and it was fun to make this little piece of Disney history, but I will admit to it being a tiny bit different than The Lunching Pad version.  Whether that’s due to Disney making their chili in enormous batches, the vagaries of different chefs using a pinch more of “this” or a smidge more of “that,” or just the fact that I didn’t serve mine over hot dogs, each chili had its own personality.  (When I make it again at home, I’ll probably increase the amount of spice a little, and increase the amount of water over the simmering beans. My final product was a touch thicker than the park version, with a little more meat.)

If you’d like to see a few other recipes that we’ve tried from the Cooking with Mickey cookbook, check out this story about the Great Northern Bean Soup from Disney’s Soundstage, or the 50’s Prime Time Café’s Cranberry Chutney. In the meantime, here’s Walt’s personal recipe from the Mickey cookbook.

Walt’s Own Chili and Beans

Wash and sort beans and soak overnight in cold water.

Next morning, drain beans and place in a 2 quart saucepan. Add fresh water to cover 2 inches over beans. Add sliced onions and simmer in a covered pot until tender (about 2 hours). Meanwhile, heat oil in a large sauce pot and sauté garlic until lightly browned. Add celery and beef and cook until lightly browned also. Add chili powder, paprika and thyme. Break up tomatoes with a spoon and mix with meat mixture. Cover and simmer for 1 hour.

When beans are tender, combine with meat, stirring gently. Add salt and pepper to taste and additional spices, as desired, and continue cooking an additional 30 minutes.