What about Disney’s Dividend?

Earlier this week, the Walt Disney Company announced a strong earnings report. (See DisneyBizJournal’s report.) The market certainly liked it, as the stock price closed on Friday afternoon up 12 percent for the week. 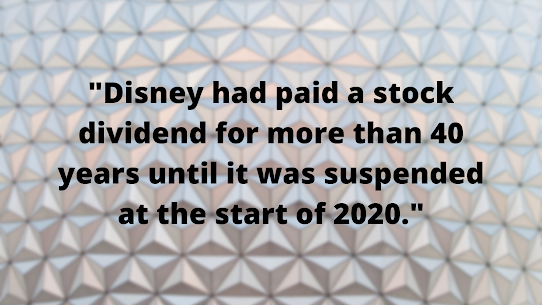 If the company’s financial situation continues to improve, a question pops up: What about the Disney dividend?

Disney had paid a stock dividend for more than 40 years until it was suspended at the start of 2020. Before it was stopped, Disney was paying an $0.88 per share semi-annual dividend. According to The Motley Fool, Disney is one of only three stocks included in the Dow Jones Industrial Average that does not pay a dividend.

When the dividend ceased, the company offered the following statement: “The Walt Disney Company (NYSE: DIS) Board of Directors today announced that it will not declare a semi-annual cash dividend for the second half of fiscal 2020, in light of the ongoing impact of COVID-19 and the Company’s decision to prioritize investment in its direct-to-consumer initiatives.”

Notice that the statement didn’t focus exclusively on the pandemic, but also noted investments being made in its streaming services. Also, as stated on Disney’s earnings call this week, the company expects to see its Disney+ losses peaking in the current fiscal year.

Disney is pointing to streaming being profitable by 2024, with at least one analyst looking for Disney streaming to break even that year. Either way, that would be a major boost to the company’s overall bottom line.

Last August, Disney CFO Christine McCarthy said, “We don’t anticipate declaring a dividend or repurchasing shares until we return to a more normalized operating environment.” She also has said, “Longer-term, we do anticipate that both dividends and share repurchases will remain a part of our capital allocation strategy.”

As for the operating environment, the pandemic’s effects obviously are diminishing. However, uncertainty swirls regarding recession and inflation.

As the recession comes to an end and inflation retreats, then 2024 might be the time to be looking for a return of some kind of Disney dividend.

The views expressed here are his own – after all, no one else should be held responsible for this stuff, right? (Also, full disclosure: I own shares in Disney.)