Disney, Baseball and the L.A. Angels

The home opener this season for the L.A. Angels is on April 4. So, what does this have to do with Disney? Well, here’s a little Disney baseball history. 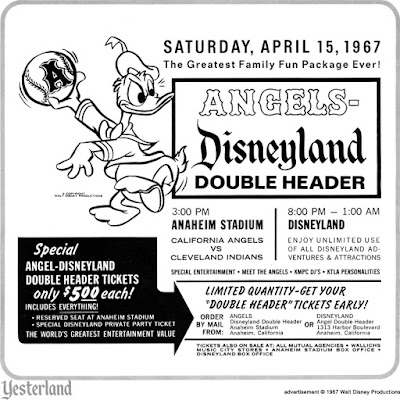 The relationship between the Walt Disney Company and the Los Angeles Angels goes far beyond the 1994 movie “Angels in the Outfield” – thankfully.

For example, as noted in the following advertisement (courtesy of Yesterland.com), the greatest family deal ever (!) was offered for April 15, 1967. For a mere $5, you could have enjoyed an Angels-Disneyland doubleheader. You would head to the 3:00 PM game versus the Cleveland Indians, and then enjoy a private party at Disneyland from 8:00 PM to 1:00 AM that night. Sign me up!

But that’s just a fun footnote. Here’s the big question: Who owned the Angels when they won their only World Series in 2002? That’s right. Disney owned the team when the Angels beat the San Francisco Giants in seven games.

The Angels had been owned by Gene Autry – actor, cowboy and friend of Walt Disney – from the time it was an expansion team in 1961. Michael Eisner and Disney acquired a stake in the Angels in 1996, and then purchased the entire team in 1998 from the Autry family. Autry passed away in 1998.

As for the ballpark, Angel Stadium underwent a $118 million renovation for Opening Day 1998, with Disney picking up $78 million of the tab, and the taxpayers covering the rest. And Walt Disney Imagineering was involved in the process. One can see the Disney touch with one particular part of the renovation, as described by Ballparks ofBaseball.com: “In left centerfield is the ‘California spectacular’ where geysers erupt and a stream cascades down a mountainside covered with real trees and artificial rocks.” Very Disney.

However, while Disney magic was evident on the field, with the ultimate success of the 2002 World Series victory, the financial aspects of owning a baseball team didn’t add up for Disney. The team was sold in 2003 to Arturo Moreno, an Arizona businessman who made his money in the outdoor advertising industry.

So, if you happen to catch the Angels at the ballpark this year, keep in mind that the team was officially part of the Disney family for a few years, and that the two businesses have had a long relationship given that they’re Anaheim neighbors.