The Walt Disney Company announced today that it has pledged a $5 million donation to the restoration of Notre Dame Cathedral in Paris. 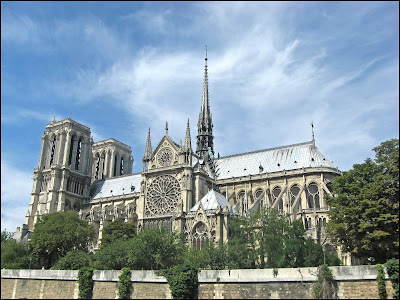 Bob Iger, Disney chairman and CEO, said, “Notre-Dame is a beacon of hope and beauty that has defined the heart of Paris and the soul of France for centuries, inspiring awe and reverence for its art and architecture and for its enduring place in human history. The Walt Disney Company stands with our friends and neighbors in the community, offering our heartfelt support as well as a $5 million donation for the restoration of this irreplaceable masterpiece.”

A report earlier today from the Associated Press said that nearly $1 billion in donations had been pledged to rebuild the cathedral: “Contributions came from near and far, rich and poor — from Apple and magnates who own L’Oreal, Chanel and Dior, to Catholic parishioners and others from small towns and cities around France and the world.”

Another AP report basically laid out a timeline of events when the fire broke out on April 15, and the battle that raged against the flames and to protect the cathedral and its treasures. As the AP described one scene:

At 7:49 p.m., the 19th-century spire that was the architectural masterpiece of Eugène Emmanuel Viollet-le-Duc and his post-Revolutionary restoration broke apart and fell through the nave. The bronze weathercock tumbled, taking with it three relics sealed inside in 1935.
It had been 66 minutes since the first flames were spotted.
The sky above the cathedral flamed orange, and the fire lurched toward Notre Dame’s iconic towers, then slipped inside.
As darkness fell, 20 firefighters climbed inside the two towers “at great risk to their lives, to attack the fire from the inside and save the building,” said Laurent Nunez, deputy interior minister.

While French President Emmanuel Macron has promised that Notre Dame would be rebuilt in five years, most experts note that it could take much longer – perhaps decades.