Have a Coke in Star Wars: Galaxy’s Edge

I’ve been known to declare on occasion: “Sometimes a cold Coca-Cola is the perfect drink.” More than a few people have, no doubt, said the same thing while in Walt Disney World or Disneyland. And looking ahead, they’ll be able to grab a Coke in the new Star Wars: Galaxy’s Edge in both parks. But it’ll be a different, immersive drink. 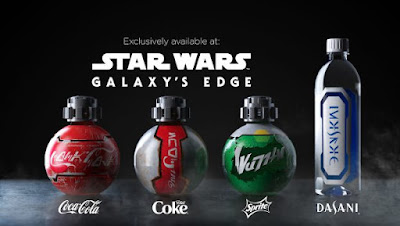 Really? what’s the big deal? After all, you’ve been able to grab a Coke at Disney theme parks since the beginning. In fact, the relationship between the Walt Disney Company and the Coca-Cola Company dates back to 1942. As noted in February 2011 post at coca-colacompany.com by Ted Ryan:

A few weeks ago, we were treated to an absolutely fantastic presentation by George Aguel, Senior Vice President of The Walt Disney Company.  George walked us through Coke and Disney's shared history beginning with our two handwritten logos recognized around the world.  He then detailed (with audio and video I don't have rights to share) joint promotions for Saludos Amigos, Disney's 1942 feature film about Latin America.  George also shared an unrealized script from the Disney  Archives from 1943.  It would have been a joint creation of the two companies but had to be dropped due to World War II.  From that point the content flew by, we were the sponsor of the first Disney television special, One Hour in Wonderland, which aired on Christmas day, 1950 as well as the later television series, The Mickey Mouse Club.

And of course, Coca-Cola was onboard when Disneyland opened in 1955 at the “Refreshment Corner” on Main Street, U.S.A., when Walt Disney World opened in 1971, and has been there and in the other theme parks ever since. Today, there’s a Coca-Cola Store, for example, at Walt Disney World’s Disney Springs, and there’s the Coca-Cola-sponsored Club Cool at Epcot. In fact, I purchased this very cool hat at Club Cool. 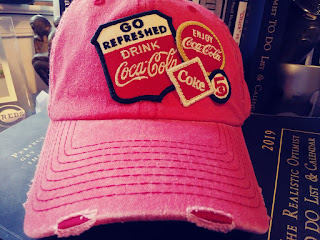 However, what Coca-Cola and Disney are going to do in Galaxy’s Edge is especially cool. As Disney announced on April 13, the company worked with Coke and Lucasfilm to create “specially designed Coca-Cola bottles that are designed to fit authentically within the Star Wars universe.” Check out the video:

Coca-Cola further explained: “The Coca-Cola Company introduces hundreds of new products each year to give people more of the drinks they want in a range of innovative packaging – but none quite like this. Spherical ‘orb’ bottles – which will be exclusive to Star Wars: Galaxy’s Edge – stay true to the Star Wars aesthetic with a rounded look, resealable caps and brand names printed on scuffed, rusted labels in Aurebesh, the written language featured in the film franchise.”

In terms of how the bottles were developed, Coke went on to note:

The creative process kicked off more than three years ago. Coca-Cola Design created dozens of prototypes of all shapes and sizes, collaborating with Walt Disney Imagineering and Lucasfilm Ltd. before eventually landing on the designs that will debut in Star Wars: Galaxy’s Edge (Coca-Cola and Disney are both listed on the patent of the proprietary over-cap).

Matt Cooper, an associate industrial designer at Coke, said the project challenged his team to “take our brands places we’d never taken them before.” Specifically, Batuu.

“We wanted to create a package that would appear like it was pulled off a ship or left behind and repurposed as a bottle of your favorite Coca-Cola beverage – all with visual cues that keep you in the Star Wars storyline,” Cooper explained.

The idea to use Aurebesh text on the labels came during a tour of the Coke Archives in Atlanta, where Coca-Cola signage with the brand’s iconic Spencerian script logo in various languages caught the attention of a few Walt Disney Imagineers.

Corporate relationships dating back 77 years are rare, to say the least. And it’s interesting to see two long-established companies being creative to engage their customers. Of course, engaging customers in creative ways is what Disney’s entertainment business is all about in the end. But it’s what a beverage company like Coca-Cola must do as well. In fact, Coca-Cola arguably does it better than anyone else, as the 127-year-old company ranks as the world’s most recognizable brand, and a significant part of that is about lifestyle. And now, it’s getting set to be the most recognizable brand in a galaxy far, far away.