NATO is very upset with Disney. No, not that NATO. The National Association of Theater Owners.

NATO issued a press release earlier this week that praised Black Widow as “a well-made, well-received, highly anticipated movie.” But it also pointed out that the movie experienced “a surprising 41% second day drop, a weaker than expected opening weekend, and a stunning second weekend collapse in theatrical revenues.” 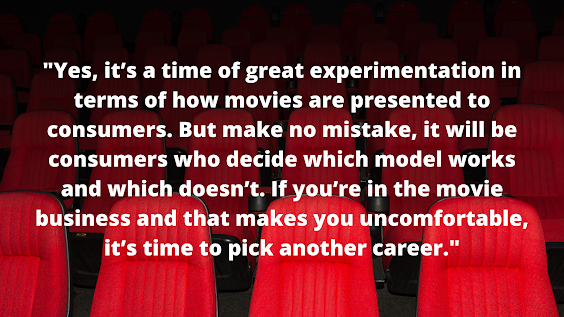 Indeed, the second weekend theatrical box office numbers for Black Widow dropped by 67 percent, which was the largest decline of any MCU movie. Disney also has been silent on Disney+ Premier revenues for the film after the opening weekend. For good measure, Black Widow ranked as the most pirated movie during its opening week.

NATO makes a case that Disney and the industry is leaving money on the table with the dual in theaters and at home release. NATO might be right … for now. But the movie business is in the midst of great change and experimentation.

Other than simply raising questions, the key NATO points were:

• “Premiere Access revenue is not new-found money, but was pulled forward from a more traditional PVOD window, which is no longer an option.”

NATO concludes that “simultaneous release is a pandemic-era artifact that should be left to history with the pandemic itself.”

Of course, no one should be surprised that theater owners aren’t keen on home offerings like Disney+ or Disney+ Premier Access. And one can easily make the case that with more videos offered via streaming, including extra dollars from PVOD (premium video on demand), the movie business will face revenue losses and a rejiggering of business models. That process is well under way.

In a Deadline piece, the author, Anthony D’Alessandro, argued what “Disney’s CEO Bob Chapek, the studio’s Media and Entertainment Distribution Chairman Kareem Daniel, and Wall Street need to wake up to is that this Disney+ Premier theatrical model is a greater fugazi than Dogecoin itself, a means of decimating a great business model whereby consumers previously bought the same piece of IP twice: in theaters and later in an ancillary window. Those who purchased Black Widow on Disney+ won’t buy it again.” And he goes on berating Disney and others in the industry, noting, “The Napster millennials have grown up, Disney, and they’re used to getting their media for free. Is this really a road you want to continue on with future theatrical films?”

This is kind of funny. Mr. Alessandro, and many others in and around the industry seem to think that Hollywood CEOs are calling the shots. For their respective studios, they surely are. But entrepreneurs pushing technology forward, and consumers making decisions about options in the marketplace, are calling the ultimate shots. Companies like Disney are at least smart enough to see that vast changes are upon us, and business models must be adjusted, accordingly. The music industry failed to see what was happening, and it took Steve Jobs to save them. Newspapers never got it – with a tiny number of exceptions – and were decimated as a result.

Fighting consumers and resisting technology are surefire paths to business oblivion. Streaming is here, and it is the future of the movie and television industries … for now, that is, until something else comes along to disrupt things. And that’s free enterprise, and it always has been. But now, in this high-tech, digital age, change simply comes a heck of a lot faster.

Yes, it’s a time of great experimentation in terms of how movies are presented to consumers. But make no mistake, it will be consumers who decide which model works and which doesn’t. If you’re in the movie business and that makes you uncomfortable, it’s time to pick another career.