The Destination D23 event, postponed from earlier dates because of the pandemic, kicked off this morning at Disney World in Florida. D23 is the official Disney fan club, and their gathering is a combination of discussion panels, exhibits, entertainment moments, and specialty souvenir shopping. Guests at the event are treated to presentations from Imagineers, authors, archivists, animators, entertainers, historians, Disney Legends, and others.

The opening panel this morning, “Destination D23 Connections: A Look at the Future of Disney Parks, Experiences, and Products,” hosted by Josh D’Amaro, Chairman of Disney Parks, Experiences and Products, offered up looks at artist renderings and video of construction projects underway at each of Disney’s domestic and international parks, as well as a few nuggets on upcoming projects (plus a really cool look at an actual lightsaber!).

While the D23 event is known for dropping big announcements on groundbreaking new attractions and programming, there wasn’t much in the way of earth-shattering news this morning.  (The weekend is still young, however.)

Much of what was shared was an expansion of some of the information guests were already privy to, such as a look at some of the activities that are planned aboard the Star Wars Hotel, the Galactic Starcruiser.  We had earlier heard about lightsaber training, but this morning we got a sneak peek of Josh D’Amaro in the training pod, and also heard about a new character, Gaia, a galactically famous space diva, who will be onboard and part of the live action storytelling on the Halcyon from Imagineer Scott Trowbridge.  (Scott helped bring Galaxy’s Edge and Rise of the Resistance to life.)  According to Scott, we’ll get a snippet from her on a November 28 ABC holiday special.

And while we know that the official opening of the Halcyon is on March 1, if you were listening closely, you would have heard that there will be some “advanced voyages” in February.

A few of the biggest announcements included:

• Parades will be returning to many of the parks, including Festival of Fantasy Parade at Disney World.

• A reimagined version of the Mickey’s Magical Friendship Faire castle show will be debuting during the 50th Anniversary Celebration at Magic Kingdom.

• Fantasmic will soon be returning to the Disney Parks on both coasts.

• World of Color will be returning to Disney California Adventure in the new year.

• The Main Street Electrical Parade will be coming back to the Disneyland Resort next year.

• The new generation of MagicBand+ will be coming to Disney World next year. It includes all the functions of the current MagicBands, but adds new technology to unlock interactive experiences throughout the parks. MagicBand+ will also be making its debut at Disneyland Resort in California in 2022. 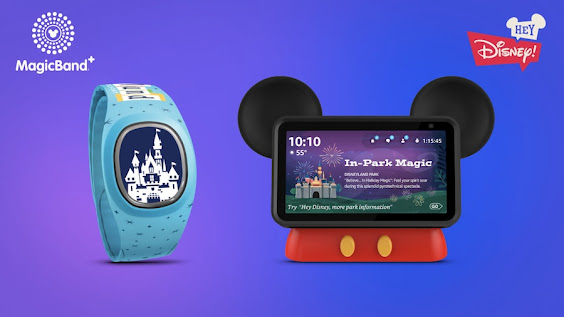 • Disney S.E.A. fans will get a new book series in April 2022, and can get an early look at those stories in an interview with the books’ author, Julie Kagawa, on an episode of Disney Insider on Disney+ next month.  A Disney+ series based on those stories is in development.

• Disney’s voice assistant version of Alexa, “Hey, Disney!”,  will be rolling out in 2022 in Disney World hotels, but now the “Hey, Disney! Disney Magical Companion” will also be coming to Disneyland California as well.

• We got a look at the clay model for the Dreamer’s Point sculpture of Walt that will be a centerpiece at EPCOT’s World Celebration.

• There is a planned opening of a new quick service restaurant in EPCOT called Connections Café and Eatery in World Celebration.

• Glenn Close popped in via video appearance to announce that she will be reprising her role as Nova Prime for the new Guardians of the Galaxy Cosmic Rewind attraction at EPCOT, opening summer 2022.  We also saw new concept art for the gallery in the ride queue that will tell us more about life on Zandar.

• Walt Disney Imagineering Research and Development shared a video of some of the tech they are working on, as well as an on-stage pneumatic display with Project Exo, bringing a concept development look at some of the experimental technology that Disney is working on to improve character technology and push the boundaries of storytelling capabilities, especially for cast actors.

• We already knew that Mickey’s ToonTown in California was getting a refurb, but we got to see artist renderings for the return of the Toon Town Hills that were taken down to construct the Mickey and Minnie Runaway Railway.

• Downtown Disney at Disneyland California is getting a renovation, with the AMC Theater area revamping for new dining and shopping venues, and a wide open lawn space to be used for events and for guests’ relaxation.

• The Disneyland Hotel Tower in California (planned opening in 2023) showed off renderings with a more detailed explanation of the Sleeping Beauty inspiration for the color palettes and artwork for the rooms, with drawings of room concepts and the pool area.

• For the international parks, D’Amaro showed off a series of video clips and artist renderings of progress at locations including the new Frozen Land at Disneyland Hong Kong (with a new nighttime spectacular for next year); the Fantasy Springs area, the 8th and largest port with a new hotel, shopping, dining and attractions in Tokyo Disneyland, featuring Frozen, Tangled and Peter Pan; and Shanghai’s Zootopia Land, with some amazing new attraction technology.

• Two new shows will be coming to the Disney Cruise Line on board the Disney Wish.  Seas the Adventure, featuring Captain Minnie and a cast of Disney friends, and a new, reimagined theatrical production based on The Little Mermaid, will be joining the existing Aladdin show.

While all these new (and quasi-new) announcements were welcome, perhaps one of the most poignant moments of the morning was Josh D’Amaro’s closing moments on stage.  A mini-staging of sorts, Josh was joined on the platform by numerous characters and cast members embodying the various attractions and experiences that have already returned, a symbolic representation of just how far we’ve come in the past few months.  The Dapper Dans; cast members from The Festival of The Lion King and Beauty and the Beast Live on Stage; Captains Mickey and Minnie from the Disney Cruise Line; the Taiko Drummers; a bride representing the return of Disney Fairy Tale Weddings; Drawn to Life performers from Cirque du Soleil; and many other cast members surrounded the stage as a reminder of everything that has returned, from shows to restaurants to experiences to Resorts.

As Disney fans always looking for the next big thing, it’s easy to forget that we’ve just come through a pandemic that shut the world down.  Josh’s closing remarks was a reminder of the road we are still travelling.

Destination D23 continues through the rest of the weekend with additional panels, including this afternoon’s “WORLDBUILDING for Star Wars: Galactic Starcruiser,” a panel on the creation of the layers of experiences planned for the new hotel. A complete listing of the panels and activities is available at D23’s website. You can also watch live streams of many of the discussions on YouTube.