Businesses across the United States are facing assorted supply chain and labor struggles as the economy continues to struggle to emerge the pandemic. Oh yeah, and there’s the fact that inflation is running hot. No one seems immune, including the Walt Disney Company. 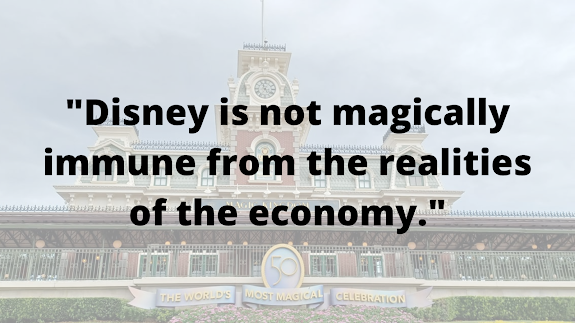 Consider that Disney faces the same cost increases being confronted by other businesses given inflation, and as a result have implemented a variety of price increases that certainly haven’t pleased any Disney aficionados. But there are more challenges, and Disney’s announcement yesterday that it was “pausing new sales of select Annual Passes” at Walt Disney World is emblematic of these difficulties.

To recap, Disney World had suspended new annual pass sales during its pandemic shutdown, with sales of revamped passes resuming in September of this year, linked to the 50th anniversary celebration of Walt Disney World kicking off on October 1. Great, right? My family, freshly moved from New York to Florida, got our annual passes.

Disney also noted, “All current Passholders can continue to renew into any of our four pass types – at their renewal rate – and continue to visit using their pass.”

By the way, in August, when it was announced that new annual pass sales would resume, the company did warn that new pass sales might be again suspended “as we continue to manage attendance to provide a great experience for everyone.”

Clearly, Disney hasn’t suddenly forgotten how to run its theme parks. And it’s not trying to annoy its customers (I mean, guests). “Managing attendance” isn’t just about limiting attendance to assure a “great experience.” It’s also about having the people, merchandise and other inputs needed to provide quality customer service. In this economy, that’s anything but a given.

(Also, on the personal anecdote front along these lines, I’ve noticed that less merchandise appears to be available for purchase in various Disney Springs stores run by Disney, as well as at assorted resorts.)

Disney is not magically immune from the realities of the economy. The company faces challenges in terms of getting the people and resources needed to operate the parks in typical fashion. Hence, it’s not all that surprising to see decisions and policies being made by Disney that seem, well, rather un-Disney.