Walt Disney and his older brother/business partner Roy appeared at a November 15, 1965, press conference at the Cherry Plaza Hotel in Orlando, Florida, near Lake Eola, with conservative Florida Governor Haydon Burns. There, they officially announced to the world what a few had already suspected: that they were the mystery buyers of almost 30,000 acres of bog and swamp land in Central Florida. 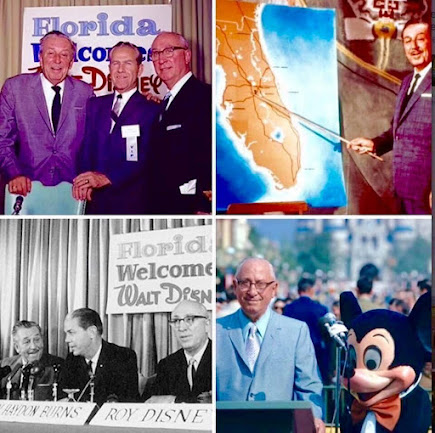 To say that this was one of the most important dates in Florida’s history is no understatement. It instantly made Florida a power player. It ranks right up there with Ponce DeLeon's arrival in 1513, and the opening, four centuries later, of the highways and rail systems connecting the northeast and Midwest to the Sunshine State.

To put it in perspective: Before Disney set up shop, most visitors to Florida - around 8 million a year - were wealthy folks from northeastern cities headed to the beaches or to the coasts, and usually only from November to March. The swampy, marshy, lake filled interior of the state was overlooked desolate land used largely for agricultural purposes.

Now, over 75 percent of the 120 million people, mostly middle class, who visit Florida from all over the world in an average year spend their time in the greater Orlando area, never venturing anywhere else in the state.

In 1965, there were less than 400,000 people living in central Florida, and it accounted for just 10 percent of tax revenue to the state. Today, it's one of the biggest metropolitan areas in the country, with close to four million residents, and provides well over 50 percent of Florida's tax revenue.

Walt passed away just about a year after this press conference, so he never actually got to see the finished version of Walt Disney World. Roy broke ground for his late brother Walt’s Florida project - renamed Walt Disney World in his honor - in 1967.

It marked the immediate transformation of a sleepy, farming state of just six million people into an economic powerhouse today where 21 million live and work in the 15th largest economy in the world, bigger than that of the Netherlands, Saudi Arabia or Taiwan.

The presence of Walt Disney World alone has brought thousands of related businesses to Florida and has generated more than five billion dollars for the state on its own.

The economic, political and social environment that is Florida today owes a lot to the fateful decision of Walt Disney to come to Central Florida. It includes:

- and the sales tax collected just on the 55 million Walt Disney World tickets sold in an average year, which is around $415 million. That’s more than what the state of Florida will spend on school construction and maintenance or the entire Department of Elder Affairs budget.

Disney pioneered land-use planning and growth management in Florida by setting off land not to be developed from the very beginning of construction and keeping it pure and preserved.

The idea of mapping out the natural systems for a 38-mile region and confining development to the least environmentally sensitive areas was unheard of in 1960s Florida.

Disney also struck a deal for self-sufficiency in roads, sewage, waste disposal, utilities and emergency services that took the burden off of local taxpayers and was the model for decades to come.

Florida owes a tremendous debt to Walt Disney, to Roy Disney, and to their successors, up to and including current CEO Bob Chapek.

Florida as we know it wouldn’t be the same without them. Thanks, fellas!

On the PRESS CLUB C Podcast, enjoy two of Ray’s discussions with Chris Lucas. The first was about Chris’ career as an actor, author and Disney expert. Tune in right here! The second was a chat about the Disney World’s 50 anniversary. Listen here!