Disney Synergy on Display with Disney+ and Resorts News

Back to the days of Walt Disney, synergy has been a big thing for The Walt Disney Company, even before the word “synergy” was used. The latest example of Disney synergy was the company’s announcement earlier today (April 5) that Disney+ subscribers will get savings on stays at select Walt Disney World resorts. 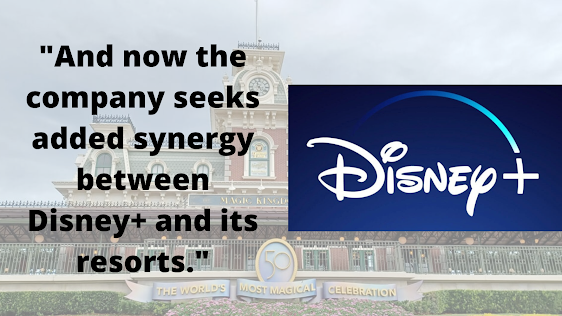 What is synergy? Quite simply, it’s about bringing together two or more products or services with the result generating more value than what would have been achieved separately.

Former Disney CEO Michael Eisner often talked about Disney synergy. For example, Eisner observed, “The term synergy may be the object of ridicule throughout the world, but not at Disney. This concept of cross-promotion and transformation of popular products into new media is an engine that helps drive our company. Synergy, for us, goes with creativity – which rhymes with selectivity – which means keeping one’s eye on the ball.”

Indeed, it’s kind of hard to miss Disney synergy. Disney has long done cross promotions on brands, merchandise, movies, television shows, theme parks, hotels and resorts, stage shows, music, sports, and other undertakings, all working together to create added value, whether it be at one location, such as at Disney World, online, or around the globe.

And now the company seeks added synergy between Disney+ and its resorts. That’s not surprising given the emphasis that Disney is placing on streaming as its anchor for growth going forward. Indeed, I noted this in a January 22, 2022, article: “Disney differs from Netflix in that it is not only a streaming play. While CEO Bob Chapek has made it clear that Disney’s main emphasis moving forward will in fact be direct-to-consumer, streaming efforts, that doesn’t mean that the rest of this vast entertainment company, such as theme parks, the cruise line, resorts, merchandise, and so on, will somehow be neglected. Indeed, since the days of Walt Disney himself, Disney has been known for brand synergy, with one part of the company fueling growth and revenues in other parts.”

Regarding this latest example of Disney synergy, the company noted that Disney+ subscribers could save up to 25 percent on stays at certain Disney World resorts during most nights between July 8 and September 30 of this year. According to Disney, the 25 percent savings will apply to “select Disney Deluxe and Deluxe Villa Resorts,” while “lower savings may be available at other select Resorts.” (Get more information here.)

This is just the beginning, one would presume, in terms of the company seeking to delve deeper into synergistic efforts related to Disney+.