Nobody seems happy with The Walt Disney Company and its CEO Bob Chapek these days, especially those in politics. Indeed, Chapek and his management team have managed to anger those on both the Left and the Right. That’s actually quite a political feat, but one with which company shareholders (full disclosure: I am a shareholder) might not be too pleased.

Is there a lesson here for Disney and other companies? Yes, it’s really quite simple: Company executives shouldn’t play politics with the shareholder’s company.

To put a finer point on this: Disney executives should have listened to the late Nobel Prize winning economist Milton Friedman. 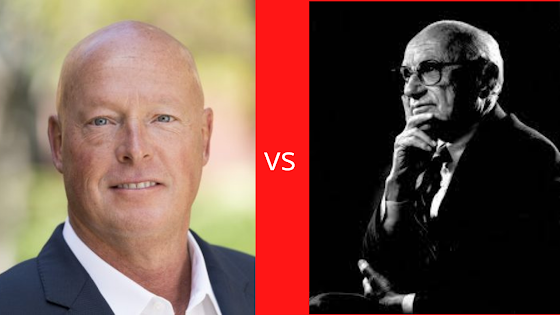 Before getting to specifics from Friedman, it seems like common sense to understand that it will not turn out well if the executives of a company decide to engage on political issues that have nothing to do with the company’s business. On the opposite end, if government is looking to tax or regulate a business or industry, then company executives would have a responsibility to shareholders to weigh in on matters. But getting involved in a hot political topic that has nothing to do with a firm’s business simply because a group of activists pressures executives to do so – as is the case with Disney’s current public/political woes – not only threatens to toss the company into a political maelstrom, but it is fundamentally wrong.

To sum up the current Disney situation, Florida’s legislature put forth a bill that was opposed by a group of activists on the Left. The legislation – the Parental Rights in Education Act, or labeled by activists in opposition as the “don’t say gay” bill – was both poorly written by the legislative authors, as well as misrepresented by opponents. Nevertheless, these activists, including some Disney employees, pressured the company into opposing the measure, with company executives pledging to work to have it repealed now that it has been signed into law. Subsequently, activists on the Right have attacked Disney, and perhaps most interesting, Florida lawmakers are now talking about repealing an assortment of benefits that the Disney company enjoys in the state of Florida.

So, Disney has managed to get itself in a political mess largely of its own making over an issue that has nothing to do with its business.

All of this gets back to a fundamental point: Company executives who use company resources, that is, shareholder resources, to engage in politics, including so-called corporate social responsibility adventures, are, in effect, guilty of stealing from the company’s owners.

This idea that companies have a “social responsibility” beyond trying to make a profit has been around for some time now. And that brings us to Milton Friedman and a now-classic essay that he wrote for The New York Times Magazine in September 1970. That’s right, these kinds of issues have been banging around the public square for more than a half-century.

While referencing certain issues at the time, Friedman hit on important points regarding the purpose of a business, and how that does and doesn’t relate to politics and social responsibility. The title makes clear where Friedman is coming from – “The Social Responsibility of Business is to Increase its Profits” – but I urge people on all sides of this issue to take the time to read the full essay. For our purposes, here are some key points raised by Friedman:

• “The discussions of the ‘social responsibilities of business’ are notable for their analytical looseness and lack of rigor.”

• “In a free-enterprise, private-property system, a corporate executive is an employee of the owners of the business. He has direct responsibility to his employers. That responsibility is to conduct the business in accordance with their desires, which generally will be to make as much money as possible while conforming to their basic rules of the society, both those embodied in law and those embodied in ethical custom. Of course, in some cases his employers may have a different objective. A group of persons might establish a corporation for an eleemosynary purpose – for example, a hospital or a school. The manager of such a corporation will not have money profit as his objectives but the rendering of certain services.”

• “The executive is exercising a distinct ‘social responsibility,’ rather than serving as an agent of the stockholders or the customers or the employees, only if he spends the money in a different way than they would have spent it. But if he does this, he is in effect imposing taxes, on the one hand, and deciding how the tax proceeds shall be spent, on the other… The whole justification for permitting the corporate executive to be selected by the stockholders is that the executive is an agent serving the interests of his principal. This justification disappears when the corporate executive imposes taxes and spends the proceeds for ‘social’ purposes.”

• “But precisely the same argument applies to the newer phenomenon of calling upon stockholders to require corporations to exercise social responsibility (the recent G.M. crusade, for example). In most of these cases, what is in effect involved is some stockholders trying to get other stockholders (or customers or employees) to contribute against their will to ‘social’ causes favored by activists. Insofar as they succeed, they are again imposing taxes and spending the proceeds. The situation of the individual proprietor is somewhat different. If he acts to reduce the returns of his enterprise in order to exercise his ‘social responsibility,’ he is spending his own money, not someone else's.”

• “Whether blameworthy or not, the use of the cloak of social responsibility, and the nonsense spoken in its name by influential and prestigious businessmen, does clearly harm the foundations of a free society. I have been impressed time and again by the schizophrenic character of many businessmen. They are capable of being extremely far-sighted and clear-headed in matters that are internal to their businesses. They are incredibly short-sighted and muddle-headed in matters that are outside their businesses but affect the possible survival of business in general… The short-sightedness is also exemplified in speeches by businessmen on social responsibility. This may gain them kudos in the short run. But it helps to strengthen the already too prevalent view that the pursuit of profits is wicked and immoral and must be curbed and controlled by external forces. Once this view is adopted, the external forces that curb the market will not be the social consciences, however highly developed, of the pontificating executives; it will be the iron fist of Government bureaucrats.”

None of this means that Milton Friedman opposed political activism. To the contrary, he argued strongly for greater freedom across society. But he did so with disciplined thinking. It’s not the responsibility of corporate executives to use the resources of others, that is, the shareholders, to do the bidding of political activists or to pursue whatever political issues those executives might favor. Each individual, from the CEO to the newest employee, engages in all kinds of political, societal, religious and cultural activities with their own resources. And such freedom should be celebrated.

While Friedman didn’t say this explicitly in his essay, the inference stands, and I will reiterate: CEO’s using shareholder resources for endeavors that have nothing to do with the company’s business is not about freedom, rather it’s theft. And efforts to turn private businesses into vehicles for political causes is a dangerous game that elevates politics and undermines free enterprise – and therefore, given that free enterprise, or capitalism, has proven to be the greatest wealth-generator and poverty fighter in the history of mankind, does real harm to the well-being of every individual in the nation.

Milton Friedman famously concluded that “there is one and only one social responsibility of business – to use its resources and engage in activities designed to increase its profits so long as it stays within the rules of the game, which is to say, engages in open and free competition without deception or fraud.” He was right.

Shareholders would do well in driving home this point to the managers they hire to run their companies, from Disney to all other firms.