Construction walls are beginning to come down around the parks, and in the past few days, several new dining venues have launched with soft openings, welcoming guests with interesting food and beverage offerings. Depending on how you count them, two (or maybe three?) new locations opened this past week.

Over in EPCOT, caffeine-deprived park guests have been anxiously awaiting the reopening of the park’s Starbucks location.  In the World Celebration area of the former “Future World,” Disney has opened two sides to one gigantic, open and airy quick-serve restaurant.  On one side, Starbucks has made its latte-fueled return at the Connections Café.  The clean lines, soaring ceilings, bright wall-sized murals, large windows, and glass-fronted exhibit cases give this room a much more contemporary feel than its former occupant, the Electric Umbrella, with its ever-changing menu.

If you enter through the opposite side of the building, however, you’ll be greeted with a different venue, the Connections Eatery, with such offerings as General Tso Chicken Salad ($11.49); a French Bistro Burger ($12.99), among several burger offerings; a miso-marinated Banh Mi Burger ($11.99); a hand-breaded chicken sandwich ($11.99), rumored to be prepared in a pickle brine for extra flavor; and several pizza options including a curry spice plant-based version ($10.99).  Kids can also opt for a Grilled Chicken Bao ($7.49), and there is an interesting looking Liege Waffle on the dessert menu ($5.29), made with brioche dough and berries. Shakes, beers, wines, and a Cucumber and Thai Basil Cooler ($14.00) are also available.

While the eatery began serving guests at its soft opening this week, the Disney website still listed the Connections pair as “Coming Soon!” as of the writing of this article. “Soon” means if you get over there quickly, you’ll beat the crowds that don’t know full opening is imminent! And incidentally, if you are in need of a charge for your phone, many of the tables and counter seats have charging stations available, making this locale especially attractive in the afternoons in the era of Disney Genie+, eating away at your battery power!

So, did the “Connections” pair count as one restaurant, or two? 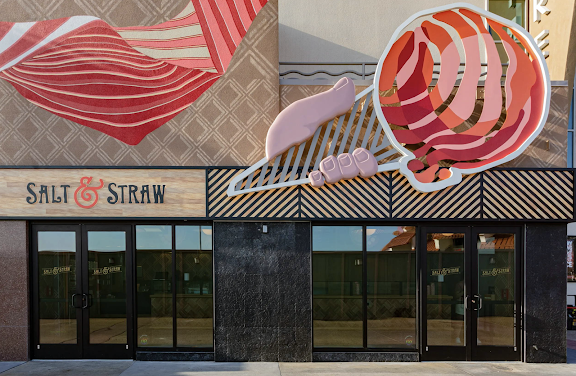 The second, or third eatery, depending on how you counted the Connections “sisters,” is a much-anticipated East Coast version of the “Salt & Straw” ice cream parlor at Disneyland California’s Downtown Disney District.  Salt & Straw is a family-run small business, with nearly a dozen-and-a-half locations around the country. The newest Salt & Straw shop, at Disney Springs West Side, began scooping out their confections for guests this week, and offers up hand-made small batch ice creams “created in collaboration with chefs, farmers, food movements, social causes and more.”

Current seasonal offerings include the five winners of the student inventors’ series, such as 12 year old Rae’s “Bottomless Limes!”; seven year old Asher’s “The Adventurous Llamanaut”; and six year old Charlotte’s “Rosie the Pink Flamingo” flavors.  (Each of the student flavors comes with its own backstory.  Gotta love the creativity, especially about the little llama who wants to be an astronaut and moonwalks!)  Prices range from $6.95 for a single scoop, to $14.75 for a four scoop “flight.”  Oh, and friendly shop attendants will be happy to give you a sample spoonful of a flavor you haven’t committed to yet.

In addition to the changing selection of seasonal and student creations, the shop sells their “classic” flavors, though these aren’t the flavors you’ll find in your average freezer case.  Honey Lavender; Strawberry Honey Balsamic with Black Pepper; Chocolate Gooey Brownie; and Roasted Pineapple Coconut Sherbet are just a few of the main menu flavors.  Pints are also available in the shop’s freezer case. (And if you don’t live in nearby Florida, you can still sample the flavors by ordering your ice cream shipped from Salt & Straw’s website.)

Salt & Straw opens at 10 am, and is usually open until midnight most days. Conveniently located near the AMC Theatres, you can grab some ice cream before or after your movie night to make your evening complete.