DisneyBizJournal's Ray Keating is the author of fifteen Pastor Stephen Grant thrillers and mysteries, and the first novel in a new series is on the way! 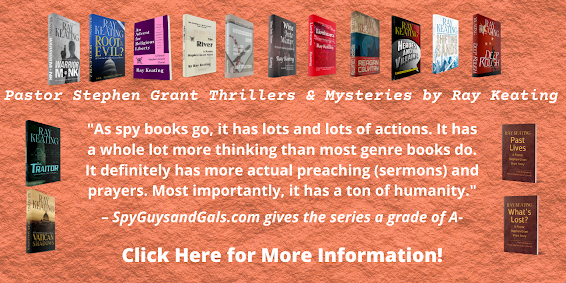 Stephen Grant, pastor at St. Mary’s Lutheran Church on Long Island, former Navy SEAL and onetime CIA operative, came on the thriller/mystery scene in Warrior Monk: A Pastor Stephen Grant Novel. During 15 books in the series so far, readers come to see that Grant didn’t fully leave his old life behind. He often must wrestle with how his current work as a pastor intersects with his former life with the CIA. With a wide-ranging group of recurring characters – from his days with the Agency to his parish work – the reader is treated to action, suspense, humor, various relationships, faith, love, adventure, mystery, and opportunities for reflection and discussion.

About Keating and his Pastor Stephen Grant thrillers and mysteries, Kirkus Reviews simply says “exhilarating.” Lutheran Book Review says, “I miss Tom Clancy. Keating fills that void for me.” The retired host of KFUO radio’s BookTalk declares, “Ray Keating is a great novelist.” David Keene of The Washington Times calls these novels “great reads.”  And another reviewer observes, “How I'd love to see Pastor Grant on Netflix!”

By the way, signed books are at www.RayKeatingOnline.com.

Yes, CATHEDRAL is Ray Keating’s sixteenth work of fiction, and the first in the Alliance of Saint Michael series. 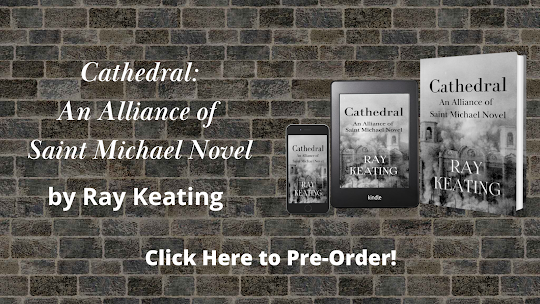 The Alliance of Saint Michael brings together men and women with varied backgrounds and talents to work covertly against the two most significant threats to Christianity and civilization at the dawn of the 1930s - communism and fascism.

In Moscow, the Cathedral of Christ the Saviour is going to be obliterated to make way for the Palace of the Soviets. The Alliance of St. Michael readies itself for its first mission – find and salvage a rare item of great significance from the cathedral before the building is lost.

By the way, signed books are at www.RayKeatingOnline.com.