Disney Shocker: The Firing of Chapek and Return of Iger

Disney supposedly is the company that makes dreams come true. Well, for all those diehard Disney fans, for unhappy shareholders, and for CNBC’s Jim Cramer, the Walt Disney Company has created some magic by doing the unthinkable. Not only has the board fired Bob Chapek as CEO tonight, but they are bringing back Bob Iger, former chairman and CEO, to run the House of Mouse. 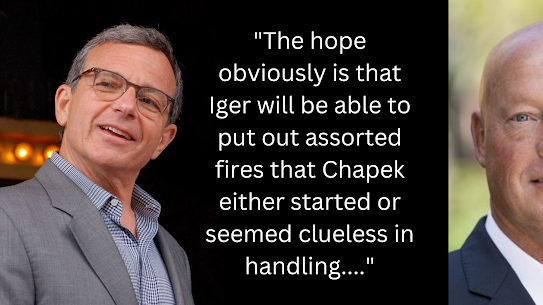 Iger, who was CEO for 15 years (2005 to 2020), according to Disney, has been given a two-year contract, “with a mandate from the Board to set the strategic direction for renewed growth and to work closely with the Board in developing a successor to lead the Company at the completion of his term.”

The market eventually will decide if this was an act of desperation, or a timely decision to cut its losses with Chapek. DisneyBizJournal recently raised questions regarding Chapek possessing the skillset needed to lead a company like Disney (see here). Either way, the process of developing a successor didn’t work the last time with Iger. We’ll have to see if the second time is the charm. By the way, CNBC's Jim Cramer was publicly calling for Chapek to be dumped.

Susan Arnold, chairman of the board, said, “We thank Bob Chapek for his service to Disney over his long career, including navigating the company through the unprecedented challenges of the pandemic. The Board has concluded that as Disney embarks on an increasingly complex period of industry transformation, Bob Iger is uniquely situated to lead the Company through this pivotal period. Iger has the deep respect of Disney’s senior leadership team, most of whom he worked closely with until his departure as executive chairman 11 months ago, and he is greatly admired by Disney employees worldwide—all of which will allow for a seamless transition of leadership.”

Iger declared, “I am extremely optimistic for the future of this great company and thrilled to be asked by the Board to return as its CEO. Disney and its incomparable brands and franchises hold a special place in the hearts of so many people around the globe – most especially in the hearts of our employees, whose dedication to this company and its mission is an inspiration. I am deeply honored to be asked to again lead this remarkable team, with a clear mission focused on creative excellence to inspire generations through unrivaled, bold storytelling.”

The hope obviously is that Iger will be able to put out assorted fires that Chapek either started or seemed clueless in handling. The Disney board is expecting that his experience with the company will allow Iger to right the ship, and set the company up with the right person going forward. At the same time, some have to be wondering about the board’s inability to get beyond Iger.

The views expressed here are his own – after all, no one else should be held responsible for this stuff, right? Also, Keating is a Disney shareholder.