We’ve eaten at most of the dining establishments at Disney World’s Coronado Springs over the years. Coronado, despite its high incidence of convention attendees and a more business-like appearance, has always been one of our favorite resorts, even though it really lacks any overt “Disney theming.”  Rather, it has a more subdued atmosphere, with soft music playing throughout the resort, and gorgeous southwestern colors everywhere, from the muted desert tones of the Casitas and Rancho buildings, to the jeweled tones of the newer Gran Destino Tower. The sizable center lake, “Lago Dorado,” also adds to the charm and peacefulness of the Resort. 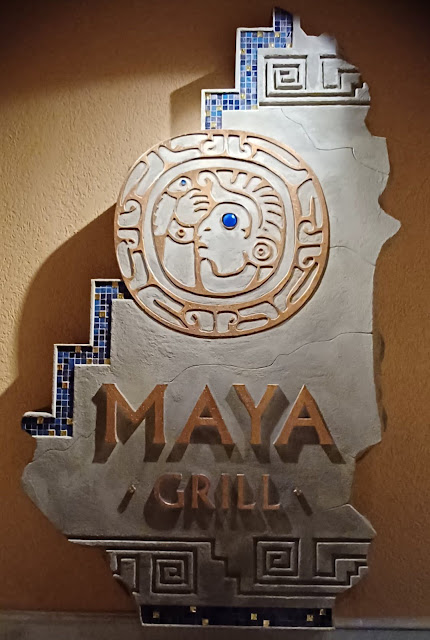 The one restaurant we hadn’t visited yet was the Maya Grill, a “grand Mexican dining room featuring ancient-modern styling and Nuevo Latino cuisines.”  With the enticing sunset water views of Coronado’s Three Bridges Bar & Grill a stroll away, we just hadn’t made it over to Maya Grill before COVID closures, and sadly, Maya took a while to reopen.

The restaurant has a relaxed atmosphere, with terra cotta colored walls, southwestern theming that gives a “pyramid” kind of vibe, fire and sun motifs, and grand columns soaring to the ceiling.  The restaurant is a good size, but feels “homey” because the dining areas are sectioned off into smaller “room” type groupings.

An unexpected bonus was the live guitar music during our meal.  The musician was really good, and we didn’t realize initially that the music was live until the guitar player strolled around the corner toward our little section of the dining room.  He shared a mix of popular and Disney tunes while walking around, even singing birthday greetings to guests at a nearby table. 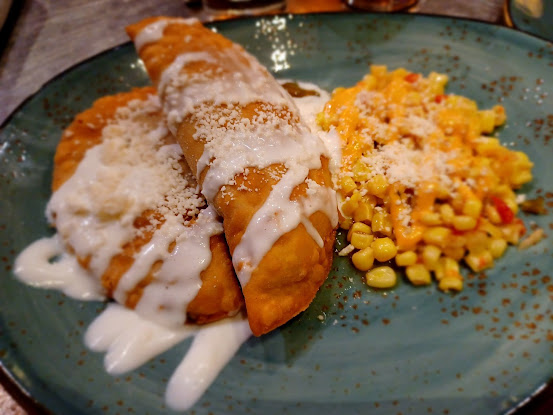 Maya Grill’s menu leans Tex-Mex, and has a plethora of unique cocktails and specialty drinks, including, of course, a selection of tequilas.  For our appetizer, we went with the Empanada de Barbacoa ($15.00), a serving of two empanadas filled with Barbacoa beef, and topped with Ranchero sauce, Mexican crema and Cotija cheese.  A side of street corn relish accompanied the empanadas.  The empanadas were warm and fresh, just a bit of a bite from the Barbacoa, which was delicious, and the empanada dough was firm rather than flaky. The little crescents were not in the least bit greasy, which sometimes happens with fried dough.  They were just the right size for an appetizer, a smidge bigger than bite-sized, but not too large to interfere with the main course.  They were just shy of “crunchy” (but in a good way), and the Ranchero sauce alternated with the coolness of the crema. 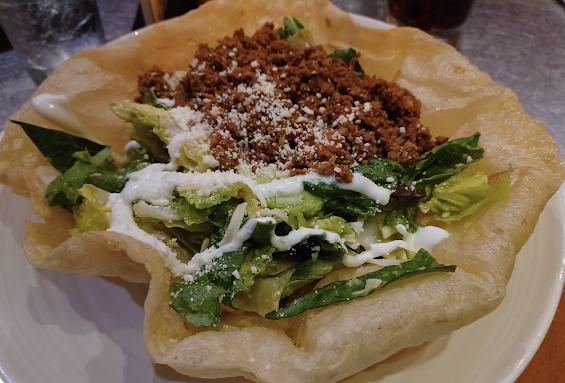 The taco salad was served in an edible crispy tortilla shell, filled with greens, nacho beef, Monterey Jack cheese, bell peppers, black olives, Mexican crema, and a lovely avocado dressing.  It was an excellent salad, if somewhat lacking in dimension.  There wasn’t much variety to the salad, as it was primarily greens with a layer of spiced meat and dressing. The taco meat had a hint of a kick, but still gentle enough for those who might be spice adverse. After digging down into the salad, we discovered the black olives hiding on a bottom layer, and two lone strips of red peppers. The olives added a nice, salty component, and gave the salad a bit of earthiness. After reading the salad description when we got home, though, we wondered if parts of the salad had been left out of our assembly, since the ingredients list also claimed “avocado and pico de gallo,” which definitely didn’t make an appearance in our salad.  That being said, we would order this salad again, but it would be improved with a touch more variety, maybe something along the order of black beans? Of course, if the few ingredients were indeed missing from our salad, that could have changed the depth of the flavor, too. The tortilla bowl itself was freshly made, warm and not at all oily, and made for a nice crunch along with the greens. 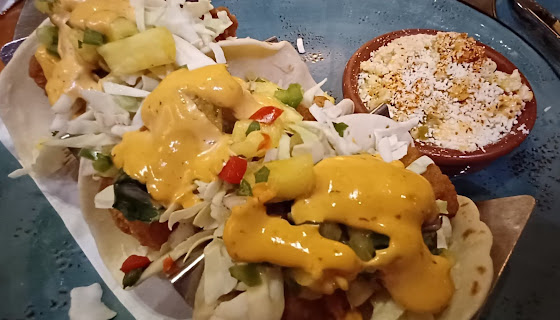 The Baja Fish Tacos were a big hit.  Incredibly soft tortillas were filled with Tempura battered cod that was light and tender, with a crunchy outer breading. The rest of the taco was filled out with shredded cabbage, and a Chipotle lime aioli and pineapple relish that gave a nice sweet and spicy mix to the sauces.  The lime brightened the dish, and the fruit accompaniment in the tacos created a great flavor mix with each bite.  The Esquites that accompanied the tacos was a unique side dish, a bit crumbly, yet with a smooth flavor that was, at the same time, sweet yet tangy.

We finished off our meal with a fun choice, the Fried Baby Churros ($10.00).  The tiny little bite sized churros were served warm and crispy (without being either too hard or too soggy), and had a high quality vanilla ice cream melting its way into the crevices of the churros.  The combination of the warm churro and melty ice cream, along with caramel dulce sauce drizzled over the top, was a yummy combination.  Strong and comforting cinnamon tones were a nice end to dinner. 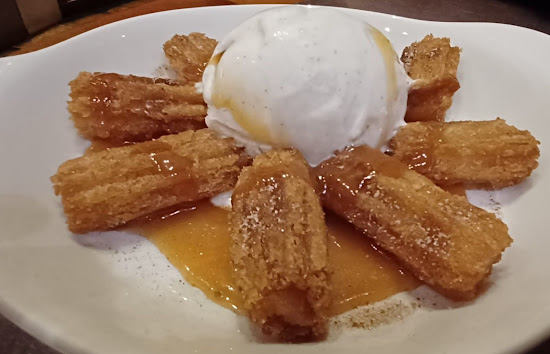 We’re sorry to say that we simply waited too long to visit this restaurant, tucked away down the end of a hallway at Coronado.  Most guests may not even realize it’s there. Between the excellent food, the delightful music and warm ambiance, and an attentive and friendly cast member as our waitress, we had a great experience, and will definitely be back to visit again.