(Update, November 18, 2022: One day after announcing that three of four Disneyland Magic Key annual passes went back on sale, Disney announced that those sales were stopped.)

Run – don’t walk – if you’ve been waiting to purchase annual passes to Disneyland’s theme parks in California. Three of the four Magic Key annual passes went back on sale yesterday, via either the Disneyland app or the Disneyland website, and one never knows when those sales will again come to an abrupt halt, as they did back in the spring. The last of the passes ceased sales in May, with the higher tiers unavailable since fall of 2021. 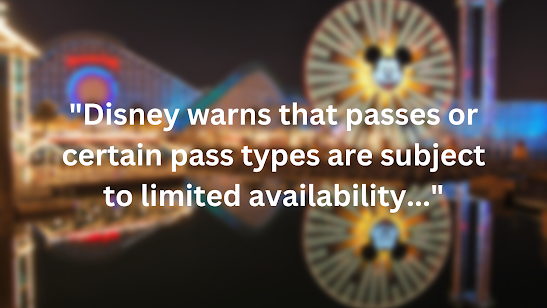 Disney warns that passes or certain pass types are subject to limited availability, so if you were planning on getting those passes as Christmas gifts, or heading to the parks for a 2023 vacation, get on your computer quickly.

After a six-month drought, the passes are returning at the same prices they were previously offered. The only pass not currently for sale is the Enchant pass; however, those holding existing Enchant keys will be able to renew them as long as they renew BEFORE their passes expire.

• Imagine: $449 (however, they are available to Southern California residents in certain zip codes only)

Each pass comes with its own set of block out dates, as well as differing “perks” per level, including varying numbers of reservations that can be held at one time; differing discounts on food and merchandise;  and varying inclusions on parking, PhotoPass offers, and Genie+ discounts.

Because of high demand, Disney has established a virtual queue for purchasing the Magic Keys; as of the writing of this article this morning, the wait time in the queue was estimated to be more than an hour before entering the actual purchase link.

Could the availability of the Magic Keys have something to do with Disney’s poor showing at last week’s Q4 earnings report?  With inflation looming, dips in stock prices, and news of layoffs and hiring freezes, Disney may be realizing they need the influx of cash from those annual pass holders after all.  There’s been no word yet as to whether annual pass sales will resume at Disney World in Florida.