Checking Out the Food Studios at Festival of the Arts

There are so many great restaurants at EPCOT that we just haven’t gotten around to visiting, mainly because our family likes to snack our way around the food booths during EPCOT festivals.  The nice part of festivals is that each family member, with different tolerance levels for both the types and amounts of food they enjoy, can find a comfortable and tasty journey through World Showcase. And with nearly year-round festivals at this point, there aren’t too many openings to try some of the long-awaited sit-down restaurants. Your stomach simply can’t hold both a full sit-down meal and the food booth snacks in the same day. Way too much goodness!

Among our favorite food booths are the Food Studios at the EPCOT Festival of the Arts.  The presentations are just so colorful and so creative that the dishes are some of the most fun foods served up at the festivals.  With that in mind, we set out to have dinner at a couple of booths and discover a few new plates this past week, the first week of the just over five-week-long festival.

The Artist’s Table Studio in the American Adventure will see our smiling faces again this season, the dishes were that good!  Our family members tried the options separately, at different times of the day, and we all came to the same conclusion:  Wow, that was unexpected! Who goes to a theme park food festival expecting good meatloaf?  But we enjoyed it so much that we’ll definitely come back for it again.  (And that’s saying something, since I make a pretty good meatloaf at home!) 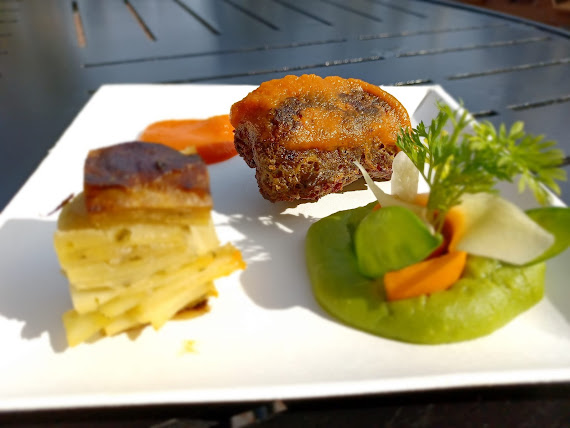 The Three Meat Meatloaf with “Peas and Carrots” ($6.50, and nope, no explanation available in the guide as to what the three meats were, but they were delicious!) was tender and scrumptious.  The meatloaf itself was small, petitely cute but definitely worth the money.  It was served with a mini-tower of potatoes, seared crisp on top yet soft and buttery below. The tiny tower was adorable, and was no more than two bites. The “green pea pudding” side-kicking the meatloaf was smooth and creamy, with a strong, pure pea flavor, served with two crunchy snap pea pods perched on top.  It contrasted with a circle of thinly “shaved carrots” sitting in the middle of the pea pudding. Carrot “ketchup” completed the dish, which according to our Disney cast member, was meant to invoke the memory of the old TV dinners of American childhood, but with a complete twist.  The line for this booth was long, but our amiable cast members kept the guests entertained with Disney trivia and Jungle cruise worthy punny jokes as we waited. 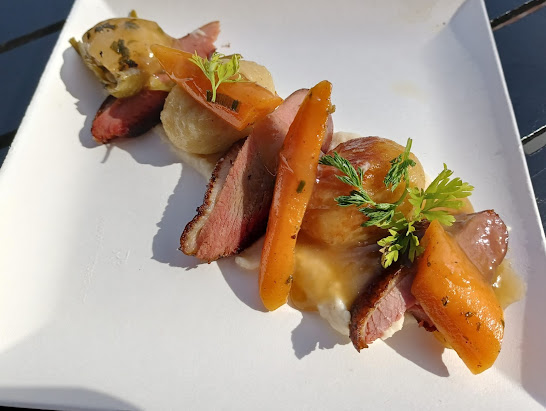 We also really enjoyed the brand new Duck and Dumplings ($7.00) at Artist’s Table. We are a family who loves roast duck, and even had it for Christmas dinner this year.  The Artist’s Table rendition was fabulously tender, with just a hint of smokiness. A bit of saltiness gave it a flavor akin to what you’d get with a baked fresh ham.  The three pieces on my plate were easy to cut with the side of the plastic fork. While the potato puree base that anchored the duck to the plate was light, it didn’t add much flavor to the dish, but rather, acted as a kind of canvas for the rest of the foods. The duck was accompanied by a few crisp-on-the-outside and compact-on-the-inside ricotta dumplings that flirted with having a teensy bit of a sweet note to it.  The dumplings were firmer than expected, browned on the outside, but still welcome in the dish.  A few strips of sliced carrots added a little color, and the duck jus drizzled over the dish was a thin coating resembling gravy, but without the overly salted flavor that sometimes haunts typical gravy. 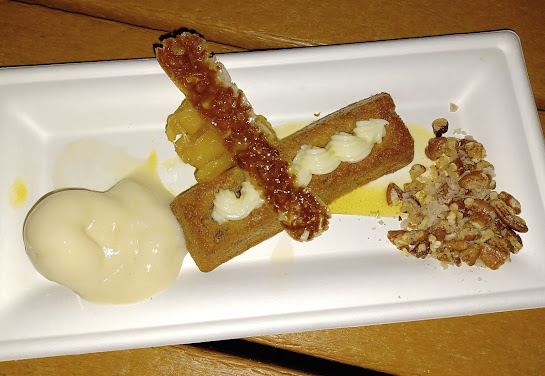 Hubby is a huge dessert hunter, so he, of course, opted for the hummingbird cake ($4.75), a sweet offering that was totally unexpected in presentation.  A small, oblong banana cake topped with a squiggle of cream cheese frosting and a scoop of pineapple and coconut, served with a side of chopped pecans and a very tasty banana sorbet, the cake hit the after-dinner spot without being obnoxiously sweet.

It would have been impossible to go to the Festival of the Arts without visiting Figment’s Inspiration Station at the Odyssey building.  Thank you, Disney, for giving us this treat!  While we had snacked our way through other parts of the festival already, and didn’t have room for the rainbow cake this time around, we did opt to try the Grape Smoothie ($5.50), which would have been pricey for the size of the drink, except for the fact that you got to keep your charming Figment cup.  The small plastic drinking vessel features Figment’s face on one side, with the back of his head on the other.  It’s especially cute when filled with the grape smoothie, giving Figgie his purple colors.  Topped with whipped cream and a rainbow of freeze-dried Skittles, the “grapeness” of the drink was reminiscent of the grape bubble gum (Grape Bubblicious?  Bubble Yum?  Hubba Bubba?  Dubble Bubble maybe?) of your childhood.  This is where it turned out to be a good thing the cup was small.  While it was a thinner drink, definitely more yogurt drink consistency than milk shake thickness, its strong grape flavor would have been way too much to drink in a bigger glass.  So, about those freeze-dried Skittles on top… I kind of liked them better than regular Skittles.  The texture was crunchy and airy, a big improvement over the chewiness of normal Skittles. It was a fun treat, but I don’t know if I’d go back for a second round. 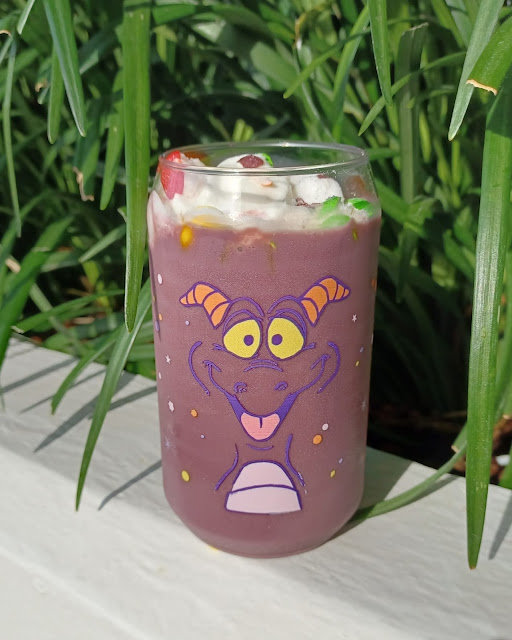 Our family members have also been frequent flyers at the food booths in Japan during the various festivals, and this festival was no exception.  Unfortunately for our readers, this year’s stop at the Goshiki Studio was well after dark, and our ability to take photos of the dishes was disappointing, and our photos disappeared with the setting sun.  The food, however, was not a disappointment.

First up was the new-this-year Rainbow Katsu Sando ($6.50). This colorful selection was excellent, and this came from a person who is not at all fond of pork. But this pork cutlet sandwich turned out to be a delicious mix of tangy (courtesy of the Tonkatsu sauce), sweet (due to the rainbow bread), and crunchy (thanks to the cabbage). It’s more of a half sandwich in style, but worth the effort.

And as for the returning Sushi Donut at Goshiki ($8.25), this was another thumbs-up. The salmon, tuna and shrimp were each fresh and flavorful, with cucumber adding some crunch. The sauces on this small plate - Wasabi Aioli, Sriracha Aioli, and Eel Sauce - ranged from a touch of spice, to downright hot. And we loved the creative donut-shape.

There are a few more dishes we are still hoping to try, but with the Festival of the Arts being one of the shortest festivals, we only have until February 20 to get there.  Looks like I’ll get at least one more night off from cooking dinner!