Disney Board’s Wild Ride Might Just Be Getting Started

For The Walt Disney Company, CEO Bob Iger, and the Disney board, this past week might have seemed like “Mr. Toad’s Wild Ride” – skidding and careening from one thing to the next. But unlike the classic ride at Disneyland, it’s not exactly clear how, where and when the action will end for the Disney board. 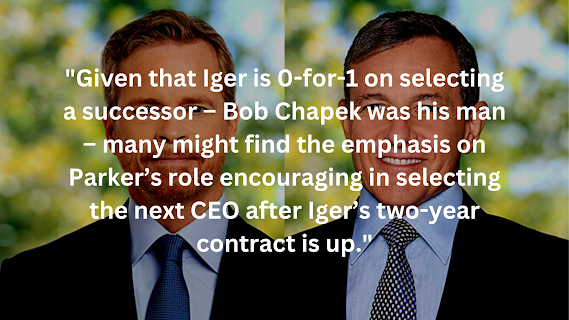 On Wednesday, January 11, Mark Parker, the executive chairman at Nike and a Disney director since 2016, was named chairman of Disney, as the current chairwoman, Susan Arnold, is reaching the 15-year term limit under Disney’s board policies. Parker’s time as chairman would start after the Disney 2023 annual stockholder meeting, that is, if he is re-elected to the board. No date has been set for the 2023 shareholder meeting, but it usually takes place in March.

Disney also announced that Parker would be working with Iger to find and name the next Disney CEO. It was noted in a Disney statement, “Mr. Parker will also chair a newly created Succession Planning Committee of the Board, which will advise the Board on CEO succession planning, including review of internal and external candidates.”

Regarding Iger’s job, it was pointed out in the company statement: “Mr. Iger’s mandate is to use his two-year term and depth of experience in the industry to adapt the business model for the shifting media landscape, rebalancing investment with revenue opportunity while bringing a renewed focus on the creative talent that has made The Walt Disney Company the envy of the industry. Mr. Iger has already taken decisive steps to realign content creation and distribution, and reposition Disney’s streaming platforms and linear broadcast and cable networks for enhanced profitability for the Company.”

The Wall Street Journal noted that Parker and Iger “have a close professional relationship.” Also, various reports noted that Parker played a role in convincing Arnold that Bob Chapek had to go as Disney CEO, and that Parker had been considered as an interim CEO.

It’s important to keep in mind the roles that CEOs and board leaders play. The chairman of the board leads (and is elected by) a company’s board of directors, with the board protecting the interests of shareholders. Among a board’s duties are hiring, evaluating and, if needed, firing the CEO. The CEO is often the public face of a company, and the CEO’s duties include making key decisions regarding the company’s operations, such as those related to strategy, operations and managing resources, and corporate culture. The board chairman and CEO work closely together, or at least, they should.

Given that Iger is 0-for-1 on selecting a successor – Bob Chapek was his man – many might find the emphasis on Parker’s role encouraging in selecting the next CEO after Iger’s two-year contract is up.

In the same statement, Disney also reacted to Trian Group’s nomination of activist investor Nelson Peltz (Trian is Peltz’s hedge fund) to the board: “The Walt Disney Company remains open to constructive engagement and ideas that help drive shareholder value. While senior leadership of The Walt Disney Company and its Board of Directors have engaged with Mr. Peltz numerous times over the last few months, the Board does not endorse the Trian Group nominee, and recommends that shareholders not support its nominee, and instead vote FOR all the Company’s nominees…”

On Wednesday night, January 11, Peltz and his fund, which reportedly has a $900 million stake in the House of Mouse, responded to Disney. As reported by The Wall Street Journal, “They argued Disney has been hobbled by poor succession planning, “over the top” compensation, mismanagement of costs and flawed strategy. They criticized Disney for using its theme-parks revenue to subsidize its streaming losses and said Disney’s acquisition of the 21st Century Fox Inc. assets put Disney in an unhealthy financial state.”

Peltz also reportedly believes that Parker and Iger “are too friendly for Mr. Parker to be truly objective.”

Of course, in reality, a company again would want their CEO and board chairman to be likeminded on most fronts, including when picking the next CEO.

CNBC reported that Trian is asserting that it’s not interested in causing trouble for Disney, which already is under challenging circumstances, given the booting of Chapek and the return of Iger in November, stock price woes, and recession worries. CNBC noted: “Trian also said it doesn’t want to replace Bob Iger as chief executive. Instead, Trian said, it wants to work with Iger to ensure a successful CEO transition within the next two years. ‘Trian’s objective is to create sustainable, long-term value at Disney by working WITH Bob Iger and the Disney Board,’ the firm said. ‘We recognize that Disney is undergoing a period of significant change and we are NOT trying to create additional instability.’”

For good measure, The Hollywood Reporter noted: “The activist investor’s Trian also specified that it is not looking to oust Iger or spin off assets like ESPN but that the fund is for ‘ensuring successful CEO succession within 2 years,’ meaning that it is looking for Iger to leave that role at that time.”

In reality, though, it’s hard to imagine how Peltz’s bid for a board seat could make things smoother for Disney, at least in the near term. As the Journal pointed out, “Disney’s failure to persuade Mr. Peltz that the company is on the right track means that Mr. Iger faces a rockier road ahead in his first year back atop Disney, which already includes challenges such as a potential recession, a prolonged stock price slump, rising costs for content, potential layoffs and stiff competition in the streaming video business.”

At the same time, many of Peltz’s concerns carry legitimacy. The New York Times summed up Peltz’s agenda this way: “Mr. Peltz, who is known for putting a magnifying glass on costs, wants Disney to revamp its streaming business, refocus on profit growth, reinstate its dividend and clean up the company’s messy succession planning.” Well, I’m not sure there are many shareholders who would disagree with various points raised by Peltz. Therefore, while Disney is pushing to not have Peltz on the board, his massive investment in the company and some of his concerns cannot be ignored.

• The Weekly Economist: 52 Quick Reads to Help You Think Like an Economist. Signed paperbacks at RayKeatingOnline.com or paperbacks, hardcovers and Kindle editions at Amazon.com.

• Cathedral: An Alliance of Saint Michael Novel. Signed paperbacks and/or paperbacks, hardcovers and the Kindle edition at Amazon.

• The Lutheran Planner: The TO DO List Solution combines a simple, powerful system for getting things done with encouragement, inspiration and consolation from the Christian faith.

•  Free Trade Rocks! 10 Points on International Trade Everyone Should Know is available at  Amazon  in paperback or for the Kindle edition, and signed books at  www.raykeatingonline.com.