From America Sings to Splash Mountain to Tiana’s Bayou Adventure

America Sings to Splash Mountain? The following are photos of characters from America Sings, which was an attraction in Disneyland that opened in 1974. 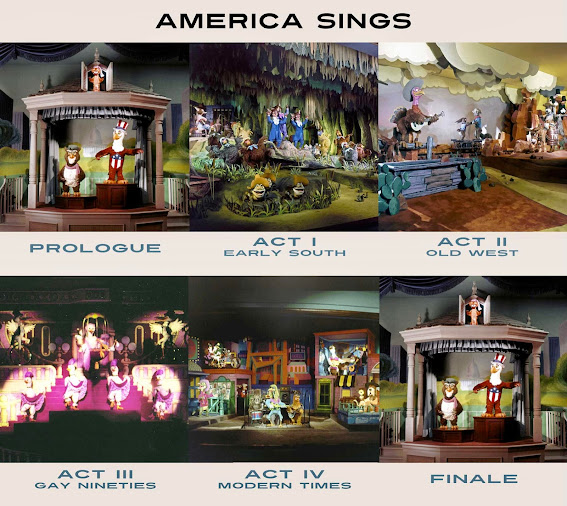 It used the rotating theater that formerly held the Carousel of Progress. There were many people upset over the change at the time.

America Sings was designed to celebrate the upcoming Bicentennial in 1976.

Shortly after it opened, sadly, an 18 year old cast member was killed on the attraction. They closed it for a few weeks, then it reopened.

In 1983, Tony Baxter had an idea for a log flume at Disneyland. America Sings was past its Bicentennial prime, and made no sense in Tomorrowland, so they decided to build another attraction in the park around the characters from America Sings. The log flume fit the bill.

To have that make sense, Baxter lifted three of the characters and some of the music from Song of the South, a movie that Walt Disney himself had pulled from the regular seven year release rotation of Disney films, after protests during its initial 1946-1947 time in theaters.

Disney CEO Michael Eisner suggested naming the ride after the hit 1983 Disney movie Splash - which made no sense.

America Sings closed in 1988, Splash Mountain opened shortly after that.

Splash Mountain was a ride using animatronics from an obsolete Bicentennial attraction with a dark history, characters from a movie that most of the public wasn’t familiar with, and the name of a film about a mermaid.

Splash Mountain had a popular run, but the time has come for a new story on Disney’s log flume.

The attraction and all of its elements (boats, cute critters, great music, a protagonist in trouble, dastardly villains, a few small drops and then a big one, just before a joyous ending) will remain pretty much the same. Disney has a habit of incorporating classic attractions in a re-theme, and they will likely keep some nods to Br’er Rabbit and his friends.

On the PRESS CLUB C Podcast, enjoy two of Ray’s discussions with Chris Lucas. The first was about Chris’ career as an actor, author and Disney expert. Tune in right here! The second was a chat about the Disney World’s 50 anniversary. Listen here!