by Ray Keating
News/Analysis
DisneyBizJournal.com
May 30, 2019

What can be expected for the local economy from the opening of Galaxy’s Edge at Walt Disney World in late August and September? 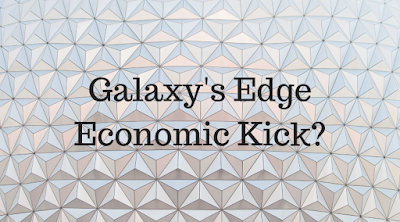 As an economist, I can tell you that getting at a solid estimate can be tricky. For example, one not only has to figure out the increase in visitors, but also the probable short-term decline in activity from locals.

A May 29threport from mynews13.com took a look at the issue by interviewing a local economist. It was noted:

Sean Snaith, director at UCF’s Institute for Economic Forecasting, says the opening could be bigger than the Wizarding World of Harry Potter at Islands of Adventure.
“When the Harry Potter attractions opened at Universal, there was a substantial jump in the number of passengers that were coming through the Orlando airport,” said Snaith.
Passenger traffic was up 2.1 percent year-over-year in June 2010 when Wizarding World opened.
“With something like Star Wars, multiple generations deep in terms of its fan base, I would expect to see something even larger once these attractions open,” said Snaith. “I think what it means for locals, longer lines at the airport, more traffic on I-4, around the attractions area.”
But for those that depend on visitors, the opening of Galaxy’s Edge is good news, especially at a time when most families usually stay home to get ready for the start of the school year.

Given the centrality of tourism to the Orlando-area economy, Galaxy’s Edge no doubt will be an economic plus for the region. How much? Again, that’s a bit tricky.

If you enjoyed this article, and since I am the author of the Pastor Stephen Grant novels and short stories, can I ask you to take at least one (preferably more) of the following steps?