Which Reality Does Disney Prefer?

by Ray Keating
Analysis
DisneyBizJournal.com
May 23, 2019

Which “reality” does Disney prefer? When looking at a company that deals in fantasy, sci-fi, animation and storytelling in general, such a question could mean a lot of different things. But in this case, it’s about which real-world technology best sweeps people away into a fantasy – virtual reality (VR) or augmented reality (AR)? 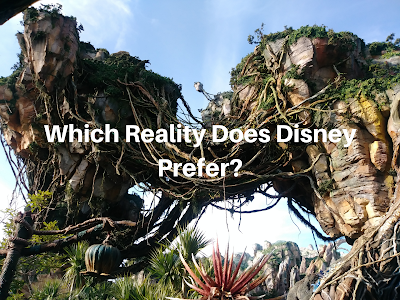 Zeroing in on the technology, PCMag.com offered a nice comparison of VR and AR, summing things up this way: “Virtual reality and augmented reality accomplish two very different things in two very different ways, despite the similar designs of the devices themselves. VR replaces reality, taking you somewhere else. AR adds to reality, projecting information on top of what you're already seeing.”

Applying the terms to theme parks, virtual reality basically is about the use of some kind of goggles or headsets to place people in a completely separate reality. In contrast, augmented reality – at least as far as Disney views it – is more about using technology, surroundings and scale to create an immersive experience that is still attached to the real world, if you will.

CEO Bob Iger has made it clear where Disney is on VR vs. AR, including comments at the 6th Annual MoffettNathanson Media & Communications Summit last week (May 14).

Iger actually had a good deal to say in response, making clear that Disney very much favors AR.

He answered: “I think the first thing that you have to consider about our parks and the Avatar experience, the Star Wars experience, the Cars experience, I think they're all great examples of this, is we're not trying to fake immersion into a place, into a land or into an interaction with characters. We're trying to make it as real as possible, with as much scale as possible. Because we think that as you enter one of these lands with rock formations that are multiple stories high and characters – real characters walking around that you can actually interact with – and experiences that you can travel through, that there's a wow factor there that is much greater than we could ever achieve with VR. Because VR, while you can have a compelling experience in terms of what you see and, to some extent, what you feel, it's never going to be as great as actually being in something.”

He went on to add: “I was just at Galaxy's Edge on Saturday morning, walking through it, and it's just staggering what we've done. We actually give you the feeling of being in a place at the outer edge of the galaxy. And you can go into a bar, that's the Cantina, and order a drink with characters walking around that you’ve seen in the movies. And I just think, personally, it's hard to drink when you have VR glasses on. They're dangerous.”

Iger, however, did note: “And on AR, I think there are opportunities there to augment reality with technology, and we'll do it in a variety of different ways. Whether it ends up in the case of Avatar and the Flight of Passage, which is the banshee experience, you're wearing 3D glasses, and it's not quite I guess, in a way that's AR, it gives you augmented reality that's 3D, and you feel more immersed in it with those glasses on. There are more opportunities for that in our parks.”

Clearly, Disney’s concern, as declared by Iger, is not producing something that’s “fake,” but instead wanting to make sure that visitors come away with a Disney “wow” factor. Iger declared, “And I think just when you think about the brand equation of the Parks and Resorts, and people coming in and just thinking ‘wow, how did they do that?’ Or, only we can do that. That's a big part of the value equation. And we do not want to stray from that or abandon that.”

When you consider undertakings as diverse as Cars Land, Pandora and Galaxy’s Edge, it’s hard to argue with Iger and Disney’s take on the VR vs. AR debate.

If you enjoyed this article, and since I'm the author of the Pastor Stephen Grant novels and short stories, can I ask you to take at least one (preferably more) of the following steps?