Disney will be staying out of the water for a bit longer, with the cruise line and water parks staying in dry dock for additional time. 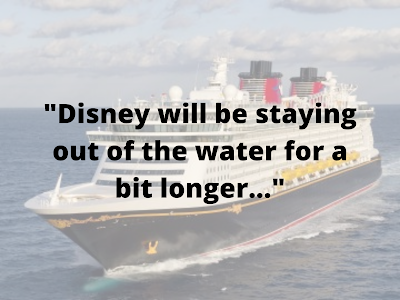 Guests with cruises cancelled will have the option of a cruise credit for a future sailing or a refund.

Meanwhile, it also has been announced that while the Walt Disney World water parks – Blizzard Beach and Typhoon Lagoon – remain closed, Disney declared that, “pending government approvals, we currently plan to reopen one of the two Disney water parks on March 7, 2021.”

Disney stated on the Walt Disney World website, “Like the other areas of Walt Disney World Resort, we will welcome back Guests and Cast Members to our water parks in a responsible way, with a plan focused on health and well-being. We will provide more details on our phased reopening plan, including a decision on the specific water park that will be reopening first, at a later time.”