D23: The Official Disney Fan Club has announced that it will be pushing the date of its next Expo to 2022. The previous biannual Expo was held in 2019, and the next one was due to take place summer 2021. Disney has already postponed its next Star Wars Celebration (it should have occurred August 2020, but is now returning August 18-21, 2022) and Destination D gathering (originally set for November 2020, returning in 2021). 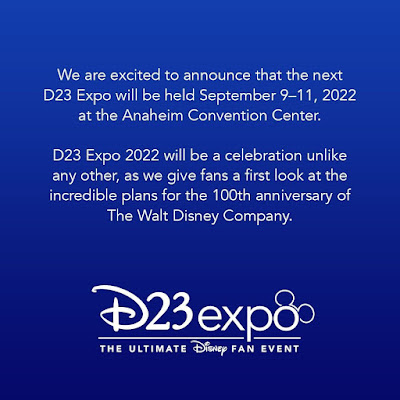 In addition to being an exposition filled with kiosks and exhibits celebrating all things Disney, the event has traditionally been a kick-off event laced with surprise announcements about upcoming Disney ventures, appearances by celebrities, and sneak peeks at new projects, including previews of soon-to-be released feature films. The Galaxy’s Edge expansion at the Florida and California parks was announced at a D23 session in 2015.

Disney has promised that “D23 Expo 2022 will be a celebration unlike any other, as we give fans a first look at the incredible plans for the 100th anniversary of The Walt Disney Company.” The 100th Anniversary will take place in 2023, commemorating the company’s founding on October 16, 1923.

It’s not surprising that Disney is rescheduling in-person events while COVID-19 is still swirling, making travel and gatherings uncertain. Theaters are still closed in many parts of the country, and stalled movie production has pushed back the release dates of a number of the movies that would have previewed at the D23 event. While many of its theme parks have reopened, the company is still waiting for the green light to open the gates at its California locale.

D23 is continuing to offer fans virtual events in the meantime.