Walt Disney Company Executive Chairman Bob Iger has resigned from California Governor Gavin Newsom’s COVID-19 economic task force.  The task force, formed back in April at the start of the coronavirus pandemic, was meant to help guide the state’s actions in responding to the virus, and to give businesses a voice in recovery efforts. 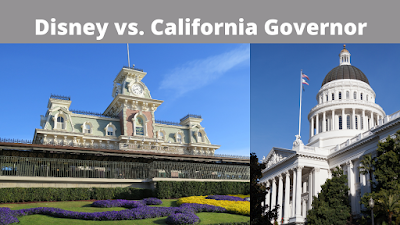 Despite the fact that Disney and other companies have had to begin laying off thousands of employees – in Disney’s case, 28,000 – California still has not released guidelines for how and when theme parks in California will be allowed to reopen.

The theme park industry, represented by the California Attractions and Parks Association (CAPA), has repeatedly asked for the guidelines to be released.

On September 8, Governor Newsom held a press conference and said the state was “getting closer to concluding when and how to safely reopen those sectors,” and as recently as September 17 indicated that those guidelines were coming “very, very shortly.”

Theme park guidance is expected to come from the California Department of Public Health this week, issuing guidelines that will allow the dozens of theme parks across California, including Disneyland, Universal Studios Hollywood, Legoland and Knott’s Berry Farm, to reopen. An initial draft of the document was released to theme park leaders for review. But Iger’s resignation may be a sign that it is too little, too late.

According to the Los Angeles Times:

Newsom’s advisers have said a new set of state public health guidelines for theme and amusement park openings would be released by the end of the week. But the leader of the trade group representing those businesses said Thursday that a draft of the proposal shared by the state falls far short of what the industry needs.

“While we are aligned on many of the protocols and health and safety requirements, there are many others that need to be modified if they are to lead to a responsible and reasonable amusement park reopening plan,” Erin Guerrero, executive director of the California Attractions and Parks Assn., said in a written statement. “We ask the governor not to finalize guidance for amusement parks before engaging the industry in a more earnest manner, listening to park operators’ expertise, and collaborating with the industry on a plan that will allow for amusement parks to reopen responsibly while still keeping the health and safety of park employees and guests a top priority.”

To put added pressure on the state to act, a commercial released by the Anaheim Chamber of Commerce and the Reopen O.C. Now coalition began airing in California, urging the state to move forward on behalf of the businesses. Reopen O.C. Now cites theme parks as “responsible for close to 100,000 jobs in Southern California.”  The commercial urged viewers to “Tell Governor Newsom Help Anaheim Get Back to Work. Reawaken our Region.”

“To our California government officials, particularly at the state level, I encourage you to treat theme parks like you would other sectors and help us reopen,” D’Amaro requested.

In addition to the company’s four Florida theme parks, Disney successfully reopened their parks in Tokyo, Shanghai, Hong Kong and France, while Disneyland (California) and Disney’s California Adventure remain closed, nearing the seven month mark. Disney has cancelled remaining reservations at their California resort through November 1, after initially announcing that they would be reopening the California parks on July 17 in time for the 65th Anniversary of Disneyland Resort.  California officials put the brakes on that plan.