There are fireworks going off all around Disneyland in California. But it’s not about those over Sleeping Beauty Castle. Instead, it’s about political fireworks being fired between Disney and California Governor Gavin Newsom (D) in terms of being able to open the happiest place on earth.

Take a look at the latest articles on the matter at the Orange County Register, and you get a pretty good feel for how frustrated Disney is, and how, well, clueless Newsom and his people are coming off. 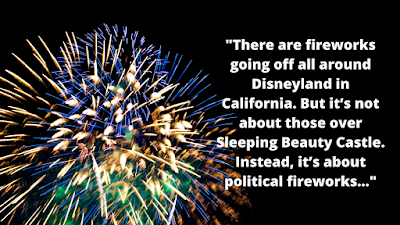 As OCR reported this afternoon, Disney CEO Bob Chapek appeared on CNBC, and said, “It seems to me that the guidelines that are set up by the state of California are more stringent than any state across the country. If you look at the history of Disney and what we’ve been able to do during the reopening — rather than arbitrary standards set up without regard to actual fact — and what we’ve been able to do as a company, I think you’d come to a different decision about reopening Disneyland.”

Chapek went on to highlight what the company has done in its other parks: “I look across our Disney properties — be it Shanghai, Tokyo, Hong Kong, Paris, Walt Disney World, the Disney bubble for the NBA — and all I see is that we’ve been able to open up responsibly using the guidelines that health care experts have given us. As a result, we’ve been very, very successful at reopening without having issues that would preclude us from staying open.”

He also noted that given social distancing requirements, the parks are at 25 percent capacity, and “that won’t change until the CDC guidelines change.”

Meanwhile, it was hard not to take away from another OCR report from October 13 that bureaucratic indifference and incompetence were running at full throttle in California. California Health and Human Services Secretary Mark Ghaly was quoted declaring, “I know a number of people are continuing to wonder when that guidance is coming out and I like to say, ‘It will come out when we’re ready.’”

Ghaly also was quoted, “In terms of the California visits, those are upcoming, and together the information and the dialogue with our theme park operators across the state will help us land in a place that I think we can all feel confident is based on the best and most up-to-date information.” Now, that’s some bureaucrat-speak.

Another report today noted that while state officials had journeyed, unannounced, to Florida to see what was going on in the theme parks there, they apparently are getting around to checking out the California parks: “A delegation of state officials are visiting Disneyland and Universal Studios Hollywood this week to review reopening plans after a team from Gov. Gavin Newsom’s administration traveled to Florida last week to inspect COVID-19 protocols at Disney World and Universal Orlando.” The OCR story also noted, “California theme parks have been asking state officials for months to visit their properties and review their COVID-19 health and safety protocols…”

The outlook? Who knows? But Chapek told CNBC, “It’s not much of a negotiation. It’s pretty much a mandate that we stay closed.”

The fireworks continue, while Sleeping Beauty’s Castle has no visitors.