The shift in emphasis at The Walt Disney Company toward direct-to-consumer online streaming continued today with the company’s announced strategic reorganization. The new structure of Disney’s media and entertainment businesses will be focused on creating original content for streaming services, as well as for legacy platforms. 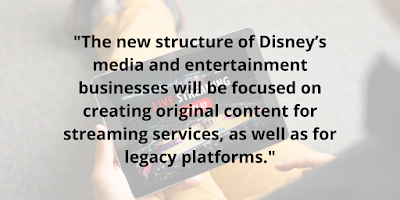 Meanwhile, distribution and commercialization will be centered in one Media and Entertainment Distribution organization for the global company. In a statement, Disney explained that the unit “will be responsible for all monetization of content—both distribution and ad sales—and will oversee operations of the Company’s streaming services. It will also have sole P&L accountability for Disney’s media and entertainment businesses.”

As for the leadership team, Disney noted, “The creation of content will be managed in three distinct groups—Studios, General Entertainment, and Sports—headed by current leaders Alan F. Horn and Alan Bergman, Peter Rice, and James Pitaro. The Media and Entertainment Distribution group will be headed by Kareem Daniel, formerly President, Consumer Products, Games and Publishing.” They, of course, will report to CEO Bob Chapek.

The three units will produce content for theatrical, linear and streaming, with streaming services notably called “the primary focus.”

Specifically, Horn and Bergman will head up studios with a focus on branded vehicles for theatrical releases, Disney+ and other streaming services, and will cover Disney live action and Walt Disney Animation Studios, Pixar, Marvel, Lucasfilm, 20th Century Studios and Searchlight Pictures.

As chairman of General Entertainment Content, Rice will focus on episodic and long-form content for streaming, and for cable and broadcast vehicles, including via  20th Television, ABC Signature and Touchstone Television; ABC News; Disney Channels; Freeform; FX; and National Geographic.

Pitaro will head up ESPN and Sports Content for the ESPN cable channels, ESPN+, and ABC.

Chapek said, “Given the incredible success of Disney+ and our plans to accelerate our direct-to-consumer business, we are strategically positioning our Company to more effectively support our growth strategy and increase shareholder value. Managing content creation distinct from distribution will allow us to be more effective and nimble in making the content consumers want most, delivered in the way they prefer to consume it. Our creative teams will concentrate on what they do best—making world-class, franchise-based content—while our newly centralized global distribution team will focus on delivering and monetizing that content in the most optimal way across all platforms, including Disney+, Hulu, ESPN+ and the coming Star international streaming service.”

Investors seemed to like what Disney had to say, as the company’s stock was up by better than 5 percent in after-hours trading at the time of this writing on October 12.