When Hong Kong Disneyland reopened on September 25, it meant that Disneyland, including Disney California Adventure, became the last Disney theme park to remain closed due to the COVID-19 pandemic. However, city and business leaders, including Disney, are no longer quietly waiting for California Governor Gavin Newsom to act.

A coalition, known as ReOpen O.C. Now and made up of city leaders in Orange County, is publicly urging action. The group recently released a commercial urging the state to provide an opportunity for local theme parks to reopen.

What’s truly bizarre is that California government still hasn’t issued guidelines for theme parks to follow in order to reopen. That’s a breathtaking example of government falling down on the job.

And when the state apparently was getting ready to finally release guidelines, the draft made clear that it would be nearly impossible for theme parks like Disneyland to reopen. As the Orange County Register reported:

California theme parks have been left waiting on the sidelines while other segments of the economy have reopened under Newsom’s four-tier Blueprint for a Safer Economy -— which proceeds from the most-restrictive “widespread” risk level through “substantial” and “moderate” before reaching the least-restrictive “minimal” tier.

The initial draft guidelines from the state for reopening California theme parks reportedly call for:

The draft guidelines likely would prevent California theme parks from reopening for weeks or months.

Indeed, it’s likely that the parks would not be able to open until sometime in 2021 under these criteria. 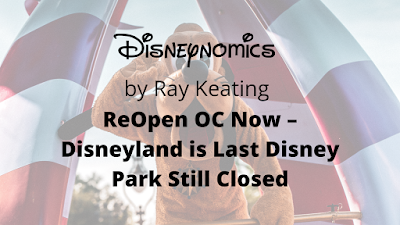 That, of course, would continue to pile on the damage in terms of lost jobs, lost small businesses, lost output and income, and mounting problems for local governments, not to mention that state as well.

In a recent letter to Governor Newsom, mayors from cities across Orange County wrote:

Your focus on providing guidelines for restaurants, schools, personal services, gatherings, and so many other businesses and activities have given us hope, because with guidelines, a path forward can be envisioned.

However, a crucial segment of our region’s economy does not have this hope or path forward – theme parks – because no such guidelines have been issued. We know you have stated that you are working on these guidelines, and we respectfully request that they be issued now.

The importance of theme parks to the Orange County economy cannot be overstated. The Disneyland Resort is the single largest employer in Southern California, with over 32,000 direct jobs at the site and over 78,000 jobs created across the Southland. Knott’s Berry Farm is America’s oldest theme park and still one of the largest in California. It employs over 5,000 people and helps support an additional 5,000 jobs in the region. Collectively, this is nearly 90,000 jobs in the Southland that are on hold, due to the closure of theme parks.

These economic engines drive our region far beyond the borders of Anaheim and Buena Park. Many guests to our beach destinations incorporate a theme park stay into their travel plans. The iconic brands associated with our theme parks bring recognition to our region beyond the direct impact of travel. The employees of these destinations, and the small businesses that supply and thrive because of them, are scattered far and wide across the Southland. Quite simply, the current state of affairs – no theme parks and no path forward for theme parks – leaves a huge hole in the very heart of our economy that we cannot fill.

Regarding Disney’s recent announcement of laying off 28,000 workers, Todd Ament, President and CEO, Anaheim Chamber of Commerce, made clear who was at least partially responsible in a statement:

The mass layoff announcement from Disney is tragic – and entirely foreseeable to all of us who have been calling on Governor Newsom to do what he has inexplicably failed to do – issue theme park re-opening guidelines. The Disneyland Resort has been closed for more than 6 months. For the first six weeks of the closure, they paid their cast members – and continue to pay their health care benefits once forced to furlough them. Disney has been ready to re-open since mid-July. Disney’s Florida theme parks have been operating safely since re-opening in July. Responsibility for Disney’s reluctant decision to lay-off more than 28,000 cast members lands squarely on the shoulders of Governor Newsom and those interests who have put their short-term agendas ahead of allowing cast members to return to work.

In the end, this is not about reopening theme parks versus public safety. Instead, this is a choice between allowing theme parks to reopen safely, and thereby allowing life to be injected back into the Orange County and surrounding area economy, or not.

The state has pulled back on its draft guidelines, with negotiations apparently continuing. So, Disneyland and other theme parks, and their employees, continue to wait for guidelines from Governor Newsom.