Disneyland Paris announced that it was once more temporarily closing as of today (October 29) in response to the latest resurgence of COVID-19 in Europe. In an interesting twist, Disneyland Paris said it hopes to reopen in December briefly for the Christmas holiday, but would then close yet again.

The company said, “In anticipation of celebrating the Christmas holiday season we will be taking reservations from December 19 – January 3 and hope to be open based on prevailing conditions and government guidance at that time. Disneyland Paris will be closed from January 4 through February 12.” 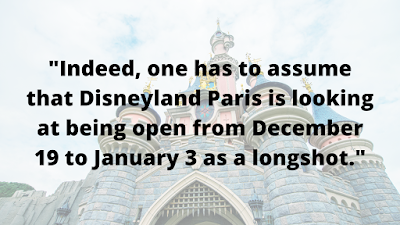 Given the coronavirus spikes in Europe, and the French government’s response (imposing at least a monthlong lock down starting on November 1), the announcement that the park would be closing was not surprising. It’s also not surprising to hear that the company hopes to be open for the holidays. However, announcing that it would then re-close once more on January 4 through February 12 is striking, and it speaks to the persistence of rather grim expectations for travel and business. Indeed, one has to assume that Disneyland Paris is looking at being open from December 19 to January 3 as a longshot.

Given the resurgence of cases under way in the United States, it becomes even more unlikely that Disneyland in California will be reopened anytime soon, and that chances are rising that Disney World in Florida will be closing once again.

Also, consider what the Motley Fool noted in a report before the Disneyland Paris announcement:

Disney World continues to lose money since reopening. We'll get a clearer snapshot on the matter when the media stock reports its quarterly results in two weeks, but it did say last time out that it's losing less money than it would if it had remained closed.

To its credit, Disney World has proved that it can reopen safely in the pandemic. There haven't been any major coronavirus outbreaks tied to any of the Florida theme parks since resuming operations in June and July. But the narrative can change, just as it is doing right now across Europe, if cases continue to climb.

And expectations are that the current rise of coronavirus cases will rise considerably over the next two months thanks to the shift in the weather. Indeed, either the narrative is changing on Disney and the rest of us, or perhaps reasons for real optimism only reside with the arrival of effective vaccines and therapeutics.