Businesses across America are suffering during this COVID-19 pandemic economy, and make no mistake, it’s small business being hit hardest. And that goes for the movie theater business. 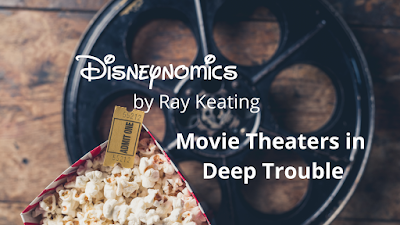 In this pandemic economy, Christopher Nolan’s Tenet was the test case. And while the film has managed to pull in just over $300 million since its release in September, the domestic take has only been $45 million. The film cost $200 million to make, not counting marketing expenditures. That normally would be a flop, but in this economy, it ranks more like a small miracle. The studios obviously have taken note.

All that remains in terms of major releases during 2020 are Wonder Woman 1984 still slated for December 25, and Pixar’s Soul scheduled for November 20, 2020. Unfortunately, no one should be surprised if those are moved as well.

Also not unexpected was Cineworld’s announcement that it would be temporarily shuttering all of its Regal Cinemas in the U.S. and U.K. as of October 8. Will larger theater chains follow? Probably.

But what about the little guys? After all, the movie theater business overwhelmingly is about small businesses. Based on the latest Census Bureau data (2017), 67.9 percent of employer firms in the movie theater (excluding drive-ins) sector have fewer than 20 employees, with 92.5 percent fewer than 100 workers.

So, what about these small theaters? A Variety story noted that Dale Coleman runs Stone Theaters, and his “venues stayed open for less than a month. During those weeks, Coleman said his best-performing location was down 87% in revenues. After 24 days, he closed his theaters back down, citing that it was ‘a smarter business decision to close those locations until a time when there are really meaningful films that our valued guests want to see.’” He was quoted saying, “It was the hardest thing I’ve ever had to do in my career, and I’ve been doing this for a very long time.”

Variety also noted that 30 percent of theaters remain closed, but that includes most in New York and Los Angeles. Without those markets, studios will remain reluctant to release major movies. Variety summed up the challenge this way: “The issue is something of a chicken and egg situation. Studios are hesitant to release films theatrically — especially those they have paid hundreds of millions to make and market — if people aren’t willing to go to the movies. However, movie theaters can’t sustain business without new products to offer customers.”

It’s all about what consumers are willing to do. And sitting in a movie theater for two hours – even with cutting-edge cleaning – does not rank as a “must do” while this pandemic persists. Clearly, the movie business is an industry that desperately needs the pharmaceutical business to come up with effective vaccines and therapeutics. But when that happens, what will be left?

In a September 30 letter to Congress from the Directors Guild of America, the National Association of Theatre Owners and the Motion Picture Association, it was noted:

Movie theaters are in dire straits, and we urge you to redirect unallocated funds from the CARES Act to proposals that help businesses that have suffered the steepest revenue drops due to the pandemic, or to enact new proposals such as the RESTART Act (S. 3814/H.R. 7481). Absent a solution designed for their circumstances, theaters may not survive the impact of the pandemic.

The pandemic has been a devastating financial blow to cinemas. 93% of movie theater companies had over 75% in losses in the second quarter of 2020. If the status quo continues, 69% of small and mid-sized movie theater companies will be forced to file for bankruptcy or to close permanently, and 66% of theater jobs will be lost. Our country cannot afford to lose the social, economic, and cultural value that theaters provide…

In addition to the 150,000 employees working in cinemas nationwide, the industry supports millions of jobs in movie production and distribution, and countless others in surrounding restaurants and retailers that rely on theaters for foot traffic. Movie theaters are also leaders in employing underrepresented groups, including people with disabilities, senior citizens, and first-time job holders. Cinemas are an essential industry that represent the best that American talent and creativity have to offer. But now we fear for their future.

Tragically, this kind of devastation reigns across many industries in the U.S. There’s a long line outside Congress looking for this kind of aid.

For good measure, given their own challenges, it’s unclear what major studios like Disney or Warner Bros. could actually do to help small, independent theater owners.

The most likely outcomes appear to be both large and small theater owners shutting down, once more, to weather the storm, and/or perhaps entering bankruptcy, hopefully to restructure, and come out the other side smaller and leaner. In the end, they will have to offer a more alluring theater experience, making going out to the movies even more of an event than it’s been, at least in the recent past. And at some point, there will be entrepreneurs who enter the industry, and offer new and improved theater experiences.

But this entire process, especially when duplicated in other industries, promises to be brutal in terms of the costs of lost businesses, incomes and jobs.

Disney+ and Its Effect on Streaming, Including Netflix

Both Universal and Disney Are Suffering