Disney, no doubt, wants its Mulan mess to go away. But the issue keeps hanging around.

And no, I’m not talking about the decision to serve up the movie on Disney+ for an extra premium price of $29.99. Nor am I referring to the fact that the film has received a mere 50% audience score on RottenTomatos.com, for example. 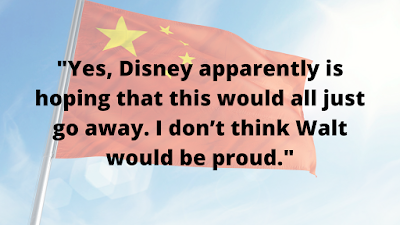 No, I’m talking about the ongoing mess regarding Disney’s filming the movie in China’s Xinjiang region where prison and indoctrination camps intern Uighur Muslims, while in the movie’s credits, Disney also thanked the government entities guilty of the oppression, along with related propaganda agencies pushing lies. (See the previous DisneyBizJournal column on the topic.)

Last week, Disney did get around to answering an inquiry from Iain Duncan Smith, a Conservative MP in the United Kingdom, and Baroness Helena Kennedy, a Labour member of the House of Lords, about this situation. The response, signed by Sean Bailey, president of Walt Disney Studios Motion Picture production, was a model of corporate-speak. Bailey managed to serve up a page-and-a-half that didn’t answer any of the issues at hand.

For example, Bailey wrote, “Although ‘Mulan’ was filmed almost entirely in New Zealand, in order to accurately depict the unique geography and landscape of China for this period drama, the producers chose to film some scenery in 20 locations throughout the country, including the Kumtag Desert in Xinjiang Province, home to an important passageway along the historic Silk Road. The decision to film in each of these locations was made by the film’s producers in the interest of authenticity, and was in no way dictated or influenced by state or local Chinese officials.”

And he later summed up, “It is standard practice across the film industry worldwide to acknowledge in a film’s credits the cooperation, approvals, and assistance provided by various entities and individuals over the course of a film’s production. In this case, the production company Beijing Shadow Times provided our production team with the list of acknowledgements to be included in the credits for Mulan.”

To put this in further perspective, Variety reported:

The earliest evidence of re-education work in Turpan, the city home to five of the government entities Disney thanked, dates back to 2013. “Mulan” was green-lit in 2015. Early reporting on the camps started to emerge around the summer of 2017. Niki Caro went to Xinjiang in September 2017, posting a photo of sand dunes there to Instagram. The production’s set designer said they spent “months” scouting in the region.

During the actual 2018 shoot, China was at the height of its “strike hard” campaign against Xinjiang’s ethnic minority population. Analysts estimate by looking at satellite imagery that there are at least 10 internment camps and five prisons in the other Xinjiang county Disney thanked.

How did Iain Duncan Smith respond to the Disney letter? He tweeted: “The reply from @DisneyStudios regarding the filming of #Mulan in #Xinjiang region is very weak and full of platitudes. The reality is that Disney simply does not want to offend China, and have given in to China’s demands and will not stand up to them. Disney's corporate policy does not appear to care about the human rights issues affecting the #Uighurs. It seems human rights come second to the corporate policy of not upsetting China.”

That’s hard to argue with, at least in this instance. Variety also noted, “Disney has not issued a formal statement or apology on the matter, and has told creatives involved in ‘Mulan’ to steer clear of the subject.” Yes, Disney apparently is hoping that this would all just go away. I don’t think Walt would be proud.