Nothing UnAmerican About Peanuts Heading to Apple TV+

(Editor’s Note: While Peanuts is not in the Disney family, the underlying issue here certainly can be applied to assorted Disney vehicles and decisions, including those still to come. Plus, if you love Disney, odds are you love Charlie Brown and Snoopy, too.)

I love the classic Peanuts specials as much as anyone else, but the announcement that holiday specials were leaving broadcast television for Apple TV+ was just business, not personal, despite some who are trying to say that “they!” are attacking American values and traditions. (Who is this mysterious “they!” anyway?)

It’s the exact opposite of being anti-American. The reason why the specials are moving from broadcast to streaming is as American as it gets. 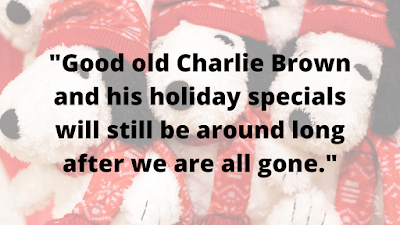 Peanuts Worldwide, founded by the Schulz family, owns the rights to the characters and shows, along with Sony and DHX.

The specials aired on CBS for decades, then ABC (now owned by Disney) licensed the rights in 2000. That contract just expired.

Apple - which got into the TV business with their new streaming channel - was already doing business with Peanuts Worldwide, through brand new Snoopy specials airing on their channel. Apple outbid ABC for the contract to license the exclusive rights to air the existing specials on TV, through their streaming channel. It’s a smart move to increase attention/buzz and attract subscribers (similar to what Disney recently did with Hamilton and Netflix did with Kobra Kai.)

This deal is completely different than the existing licensing deal for home video, currently owned by Warner Brothers. The DVD’s and Blu-rays will continue to be available for decades to come, and can currently be purchased at supermarkets for less than $10. Most libraries also have copies.

This is not the 1970s any more, where one company like McDonalds or Dolly Madison would foot the bill for airing the specials once a year, and over 100 million would watch.

Ratings for the Peanuts specials have gone down 70% over the last twenty years, and sponsors were getting hard to come by, as TV viewers went elsewhere. Disney likely didn’t see the return on investment value in matching the bid figure that Apple offered.

Is it sad that the tradition of watching the Charlie Brown specials on network TV once a year is going away (for now, at least)? Yes, it is, but that’s not because of some insidious push to erase all things wholesome or some race to political correctness. It’s capitalism, pure and simple. Apple is not the villain.

If you really want to be mad, vent at Peanuts Worldwide and Sony for putting the rights up for bid. Even then, remember that they are not a charity and if someone was offering them a sweetheart deal to air the classic specials and create new ones for a new generation (increasing the value of their brand) they’d be crazy to turn it down.

To put it in simpler terms: if you opened a brand new restaurant in a town where the people went crazy over a special holiday pie made by one bakery but only sold in one market - in any area of town that people are moving away from - on one day each year, and you made an exclusive deal with that bakery to be the only place in town that offered the pie because you knew that people would immediately flock to your restaurant, which is in a more popular neighborhood, or - at the very least - you’d get a bunch of publicity, you’d absolutely do it. You certainly wouldn’t want anyone else offering it at the same time.

To be generous and to honor the sentimental feelings of the people in town, you could even offer a weekend of free pie at your new restaurant just to get people in the door, hoping that they might sample your other offerings and come back again, this time paying for their food. If not, no problem, but you’re still offering access to their beloved product for free. That’s a smart business plan. You’re not completely destroying a tradition, you’re just providing it in a different fashion in a different place, one that more and more people are heading to.

Good old Charlie Brown and his holiday specials will still be around long after we are all gone.